Not so very long ago -- in a time before email, text messaging, and the internet -- adventures began well in advance of departures. They could began with getting up at 5 in the morning to phone a hotel on the other side of the planet and (if the connection was good) attempting to make a reservation inquiry in a language other than your own. They might involve snail mail deposits to hold your rooms, and hand-written receipts confirming your reservation, replete with postage stamps from far away places with exotic-sounding names. And, by the time you actually departed on your long anticipated voyage, you were quite often tingling with excitement -- mixed, perhaps, with a bit of anxiety of the new and unknown.

Over the years I've accumulated dozens of sketchbook/journals -- many of them produced long before blogging or the internet. So, I thought I'd take a trip down memory lane, dig up some interesting images and journal entries, and begin a new series which I'm entitling "Old Gold." My intention is to post to this series once a month or so, alternating it with my current travel adventures and an additional series entitled "Tools of the Trade" that will focus on technical issues and product reviews. And, hopefully, everyone will find something of interest in the mix.

A few years ago I received a foundation grant to spend several weeks doing a sketch crawl across Italy.  Today I'd like to invite you to accompany me as I revisit the first stage of that voyage of discovery -- the Eternal City, Rome.

"When thou art at Rome, do as they do in Rome."
-- Miguel de Cervantes Saavedra


My flight into Rome was long -- San Antonio, Texas to Houston to Newark, NJ to Rome -- but it was on Alitalia rather than an american carrier, and there was some charm in that. But the early morning let-down into Rome itself was magical! As we neared the airport the earth was shrouded in a thin mantle of mist with tall pines rising above the velvety fog and the whole scene backlit by the warm pastel hues of the rising sun. What an auspicious beginning! I thought. 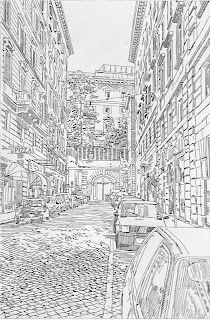 My hotel was on the via Venizia, a very quiet, peaceful side street off the via Nazionale, which I enjoyed sketching in both directions -- once in pen & ink and the other in color pencils on toned paper. 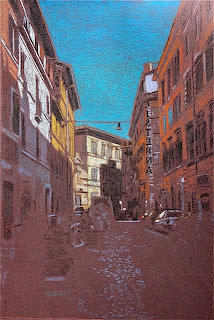 "The dominant colors of Roman architecture seem to be patinas of creamy burnt oranges, ochres and siena. And, despite all that has been written about Roman use of concrete, I see a great deal of brick construction." (The narrow streets and tall buildings were an ingenious pre-airconditioning way of providing relief from both summer heat and winter winds... and made wonderful subjects for exploration and sketching.) 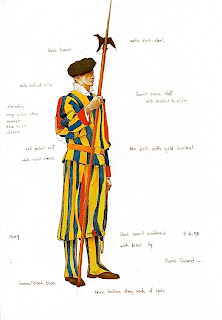 "After a cautionary warning about pickpockets from my landlord I caught the no. 64 bus to the Vatican." (The sketch of the the Swiss Guardsman was an excuse to relax and enjoy the sunshine after spending some 7 awesome hours in St. Peters.) 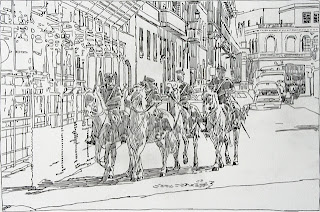 "The art of travel is to deviate from your plans." A good adventure is a fairly equal mix of carefully laid plans, creative problem solving when those plans go awry, and a refreshing portion of the serendipitous -- as when, on a walk through the quiet streets of the Trastevere district, I encountered these four police officers on their snow white chargers... sabers and all. (My personal philosophy is: when forced to choose between a pre-planned itinerary and the totally unexpected... go with the unexpected!)

Well, I hope you've enjoyed the first installment of Old Gold and that you'll join be next time, when we continue the adventures (near and far, old and new.) In the meantime, if you would like to see some more of the sketched from my experience in Rome, please visit the Places page of my home site (www.earnestward.com) here.