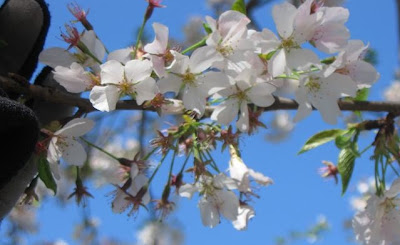 The stylographic pen was the first successful self-feeding pen in history and is still with us today (think tech pens). The cherry blossom is an iconic symbol of Japanese culture: representing purity and simplicity, and celebrated in art, song, and annual festivities. (It has even spread to North America, where the United States celebrated the centennial of the Washington, DC, Cherry Blossom Festival this year.) What is the connection between the two? Read on.... ;-)

Ever since mankind first began writing with feather quills and ink there have been technically-minded folk who have worked diligently to develop new technologies that made pens more reliable, more versatile, and more resilient. 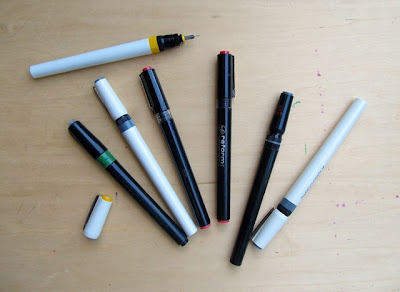 In 1803 cutting edge technology allowed British manufacturers to introduce steel nibs that easily outlasted the older, more labor-intensive feather quill. And, for the next century, Great Britain was the source of arguably the best nibs in the world. But there were still major shortcomings of the pen; it ran out of ink quickly and had to be re-dipped, and if you were traveling there was always the threat of a messy ink spill. The search for a pen with a built-in ink reservoir was on. 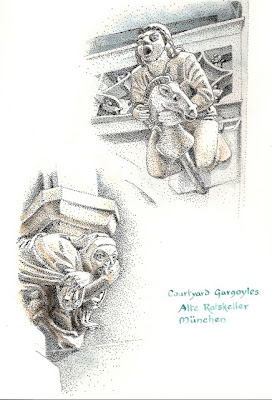 Microns are equally adept at line work and stippling

Enter in 1875 Duncan MacKinnon, a Canadian pharmacist and the inventor of the world's first successful stylographic pen, a pen type that offered two very remarkable technical developments: a built-in ink reservoir; and a tubular "nib" that produces an amazingly thin, uniform line -- perfect for technical drawing and fine writing. The stylographic pen not only predated the fountain pen by some 10 years, it also offered (and continues to offer) one major advantage over the latter; it could use waterproof ink! But there was room for technical improvement. 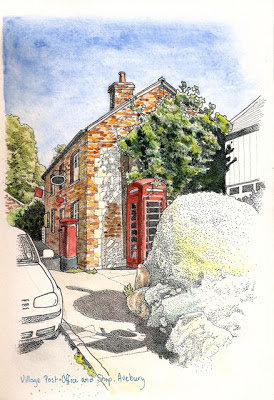 In 1877 the American A. T. Cross (founder of the Cross pen company) received a patent on an improved, spring-loaded feed. And in 1910 the Sanford & Bennett company patented the rugged "gravity feed" system that has been the unchallenged standard design for "tech pens" ever since -- or at least it was until the 1980s. 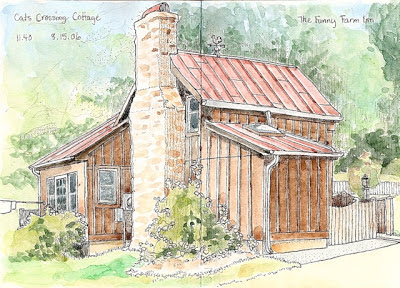 Technical/stylographic pens have one flaw; their amazingly fine tubular tip or "nib" is subject to blockage if the ink congeals or dries out and then requires a complete disassembly and cleaning. (To this date all Rapidograph tech pens are sold with a wheel-shaped wrench for disassembling the nib section.) 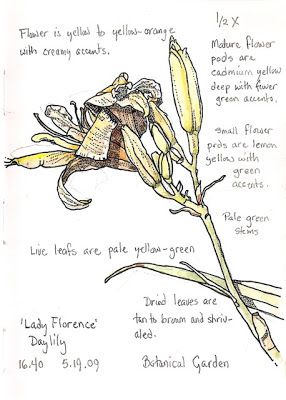 
Then, in 1982 a small Japanese firm called Sakura Color Technologies (Sakura means "Cherry Blossoms" in Japanese) came up with a brilliant idea: combine the fine steel tubular nib of the stylographic pen with a rigid, highly refined version of the fiber tip pen, and introduce a nano-particle pigment ink that is pH neutral, waterproof, lightfast, and archival. The result was the Sakura Pigma Micron pen, which revolutionized not only in-studio technical drawing but also field work, nature sketching, and travel journaling. (I have found them so reliable personally that they were the only pens I chose to carry during my 8-week sketch crawl of Europe, and I had the extreme good fortune to enjoy their sponsorship during my 10-week wilderness adventure in the North Cascades mountains.) 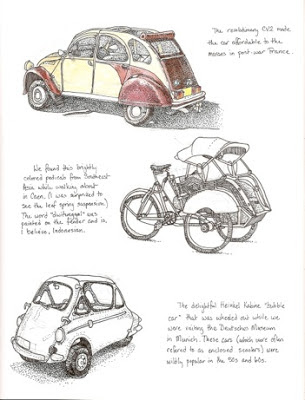 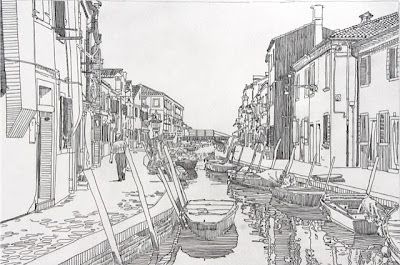 the Micron's larger ink reservoir means no need for refills,
even during the most detailed project


Of course, the steel- or gold-nibbed fountain pen is far from dead. (I, for one, absolutely love it's creative potential.) But for ease of use, unmatched reliability, and the way it works in combination with watercolors, the Sakura Micron is an artist's dream. 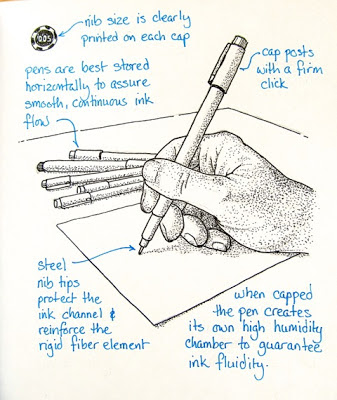 Technical Notes: I had a fascinating telephone conversation with Peter Ouyang (Sakura of America's Vice President for Marketing and Product Development) and learned some very interesting technical details about Microns. For instance, while the pen comes with a pocket clip this is intended as a temporary means of "carry." Mr. Ouyang informed me that the pigment particles in the ink are subject to the effects of gravity and, therefore, the ink will actually drain from the tip if stored vertically. It is best to keep the pens capped and horizontal when not in use. Mr. Ouyang also told me of a little "trick" if one's pen seems to run dry; first recap the pen immediately (this created a micro-climate that promotes a moist environment) and then set the pen cap-down in an empty cup overnight. If there is still ink in the reservoir gravity will feed it back into the tip and the pen will write good as new in the morning. Interestingly, Mr. Ouyang informed me that Sakura actually adjusts the fineness of the pigment particle grind for each nib size -- the finer the tip, the finer the grind -- and, because of the specific nature of each pigment, there is sometimes a limit to how fine a nib certain pigments will flow through properly.

Historical Notes: The Micron isn't Sakura's only claim to technical fame. In 1925 the company created the world's first oil pastels -- a new medium that Pablo Picasso soon fell in love with and, as they say, the rest is history. And Sakura has not been satisfied to rest on their much deserved laurels. In 1984 Sakura produced the world's first gel inks and continues to be an art materials innovator right into the 21st century.

Second Grand Prize Giveaway: Since this is my second giveaway I figured it only right to have two prizes, and the folks at Sakura of America have generously provided some wonderful gifts. The first prize will be a new set of 6 Pigma Micron black ink pens in sizes .20mm to .50mm AND one Gelly Roll opaque white pen AND a red Sakura pen carry! 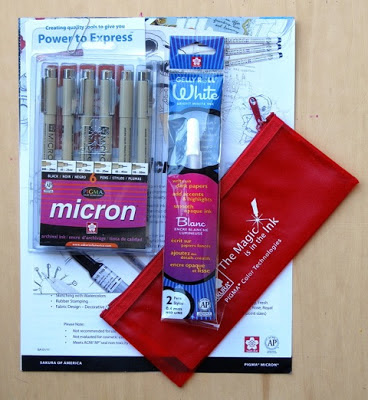 The second prize will be a set of 6 Pigma Micron basic color pens AND one Gelly Roll opaque white pen AND a red Sakura pen carry! 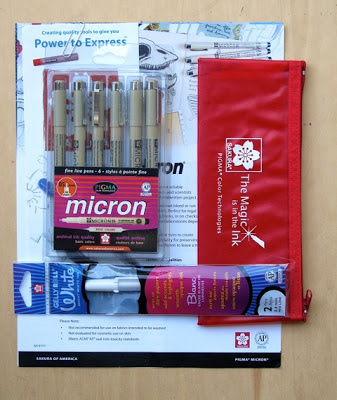 The Entry Rules: I'll keep these simple: 1) Click on the blue "Join this site" button under "Followers" in the right side bar (if you've joined previously, you've already completed step one); 2) leave a comment (do NOT include your contact information) for this posting any time between now and Friday, November 2; 3) two winners will be drawn at random and contacted via PM on Saturday, November 3. Winners will also be announced here on Monday, November 5.

Good luck!
Posted by Earnest Ward at 8:40 AM