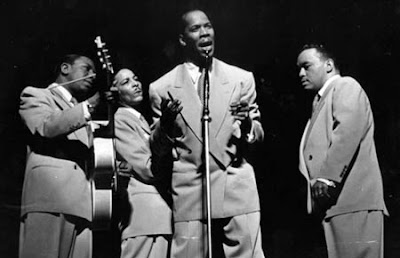 no, not those Inkspots (but if you don't know their music you owe it to yourself to go here)

Over the weekend I received a delightful package from the folks at The Goulet Pen Company. The packages contained an assortment of 14 fountain pen ink samples (to add to my collection of 18 other fountain pen inks I already had), a business card and book marker -- a really nice book marker (one is included free with every order, and that's quite appreciated by those of us who are also bibliophiles), 2 ink syringes... and a grape-flavored tootsie pop miniature (in a blue that appears identical to that on the company's logo). 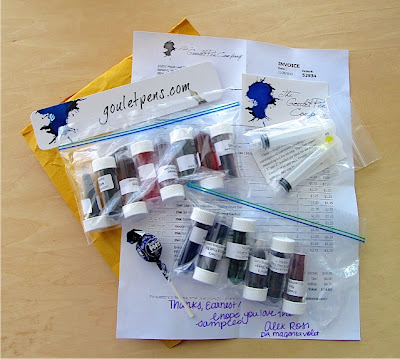 I am beginning a new series of articles reviewing some of the inks that have been made specifically for use in fountain pens -- mostly modern day inks, but occasionally a bottle or two of vintage ink that I've come across during my travels and adventure. Each article will focus on inks of a specific color from several different manufacturers, will evaluate the selected inks' specific color/hue, intensity, shading, flow, drying time, water resistance, propensity for staining and creeping, and light fastness*. 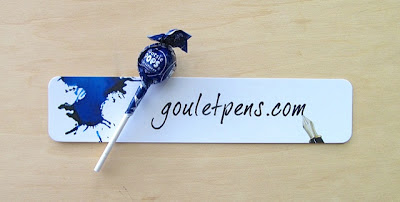 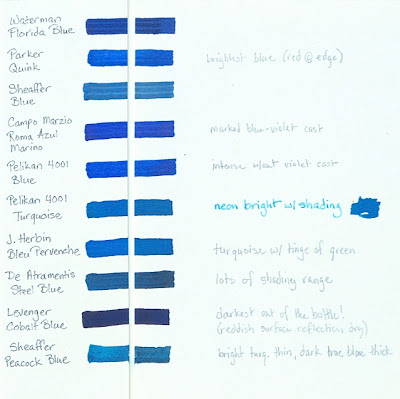 For the light fastness test I have created a panel on Arches 140 lb./300 g/m2. The panel has been cut down the center and the right section will be place in a north-facing window for the next six weeks (* that's intense, mostly cloud-free north Texas sunlight). I'll also post a weekly update here to document what, if any, effect the UV exposure is having. 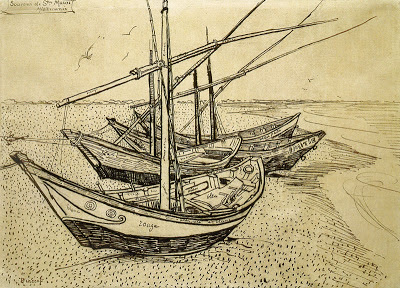 While I was in grad school one very memorable conversation I had with one of my art history professors revolved around Vincent Van Gogh's gorgeous pen and ink drawings. I went on about how I loved the effects Vincent achieved with his homemade reed pens, and how beautiful his brown ink was... and I was absolutely floored when my instructor said, "Well, you know that ink was actually purple when he drew them don't you?" That was the day I learned that not only were some dyes subject to fading (fugitive) when exposed to UV light but that some dyes also change over time simply because of their chemical composition. 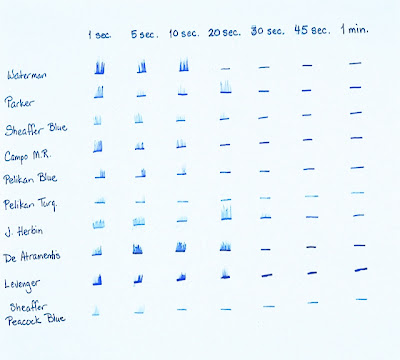 For the drying time test I drew a chart with a series of lines for each ink. The ink lines were then checked to see if they would smear at intervals of 1, 5, 10, 20, 30, 45, and 60 seconds. Pelikan Turquoise and Sheaffer Peacock Blue had the shortest drying times at under 10 seconds (very useful for left-handed writers, like my wife and son, who want to reduce the likelihood of smudging) while the J. Herbin ink had the longest drying time at just over 30 seconds. Four of the inks (Parker, Sheaffer, De Atramentis, and Levenger) shared drying times of just over 20 seconds, while three (Waterman, Campo Marzio, and Pelikan Blue) were just over 10 seconds. 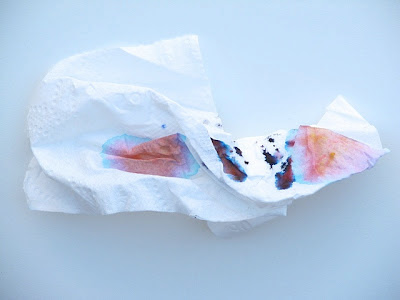 dye separation in one re-wet and mopped ink

Most fountain pen inks are made up of water soluble dyes rather than pigments, and many of these inks are a complex mixture of several dyes -- some more soluble than others. The photo above shows a tissue that was used to blot an unknown brownish-purple ink that had dried up in a vintage rotting Art Pen. (Note that there appear to be at least four different dyes in this one ink! 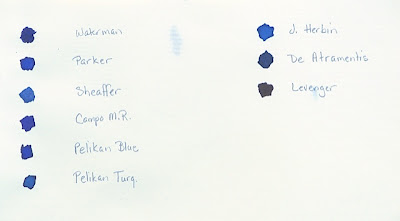 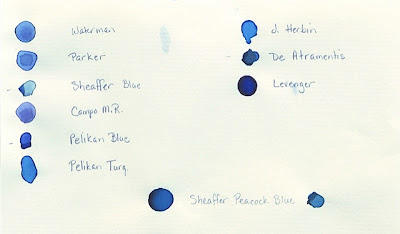 To do the dye separation test I first created a chart on Stratford 400 series calligraphy paper. Next I dripped water on the dried ink, being careful not to disturb the ink with the brush. I observed that the Waterford, Parker, Sheaffer, and Campo Marzio all lost considerable intensity after re-wetting as much of their dyestuff was absorbed into the paper's fibers. I also noticed that the Campo Marzio shifted toward lavender after re-wetting and, while the Levenger lost none of its intensity it did develop a decidedly purple ring after re-wetting. (I added Sheaffer Peacock Blue -- another Turquoise -- to the separation test on Dec. 6, with an undiluted drop on the left and a re-wet dot on the right. Like the other two turquoise, there was no noticeable color separation and intensity remained very strong.) 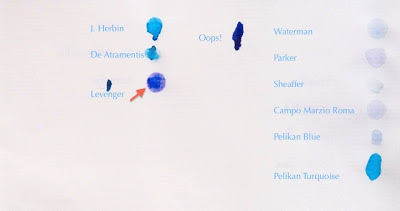 On the reverse side of the separation test chart it could be readily observed that red dye had separated from the blue and soaked into the paper from the Parker and Campo Marzio Roma. And, while there had been no bleed-through during the initial inking, the Pelikan Turquoise, J. Herbin, De Atramentis, and Levenger all soaked through after the re-wetting.

In conclusion, Levenger's Cobalt Blue was the hands-down winner for sheer concentration of dye in their formula. (In fact, Levenger users could very likely increase the color intensity of this ink by expeditiously experimenting with the addition of small quantities of distilled water to increase the ink's transparency.) The J. Herbin, Pelikan Turquoise, and vintage Sheaffer Peacock Blue tied for color saturation and intensity straight out of the bottle. The De Atramentis offers fantastic shading -- from a brilliant try blue when applied thin to near-black when thick (a great candidate for wet nibs and signature pens). And the old classics (Waterman, Parker, Sheaffer Blue, and Pelikan Blue) offer flawless/skipless service and reliability for fountain pen lovers looking for a more traditional (maybe slightly "quieter") blue.

The J. Herbin appeared to be slightly more viscous in the sampler bottle/pen than the others. But none of the inks in this test batch gave any indication that they would be a staining or cleaning problem (think Baystate Blue maybe) for pen owners.

At the end of next week's article, and each week for the next six, I will post a photo and progress report on the blue fade chart. Look for another ink review (on reds, oranges and browns) in 2-3 weeks. (I'll be alternating the ink reviews with other subjects and themes.) In the meantime please feel free to post any questions you have regarding this ink selection, or specific inks you might like to see in future reviews.