Zeta -- the sixth letter in the Greek alphabet, the middle name of my favorite Welsh actress, and now a new series from the premium artist's sketchbook publishing firm of Stillman & Birn. 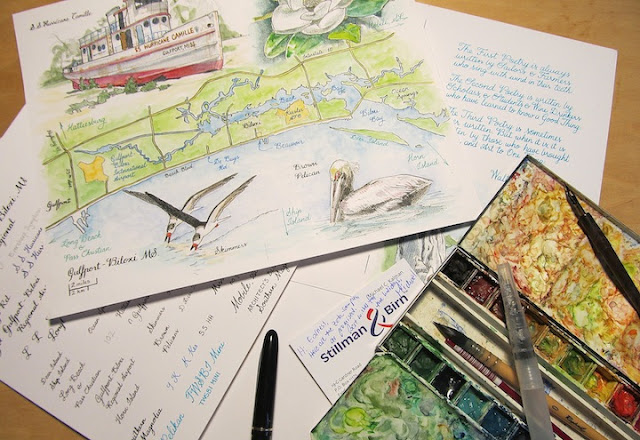 While Stillman & Birn's widely acclaimed Beta and Delta Series have provided the artists community with two outstanding watercolor sketchbooks, Michael Kalman has stated that the company (not satisfied with merely resting on its laurels) is constantly evaluating the needs of artists/journalers and asking how their line of sketchbooks can be improved to better serve those needs. With invaluable input from experienced artists like Jamie Williams Grossman, it was decided that there was just such a need for a multimedia sketchbook with a paper weight similar to the Beta Series but with the pen-friendly surface of the Epsilon Series.

The folks at Stillman & Birn then turned to the same European mill that had done such a brilliant job of developing the papers for the company's five existing sketchbook lines and, after months of testing and evaluation, the new Zeta Series was announced.

In December  Michael Kalman asked me if I would be interested in trying out some of the pre-production Zeta paper. (I know what you're thinking -- artist auto-response: "Is this a trick question?") And, of course, I jumped at the opportunity! Michael promptly sent me a batch of 8 5/8" x 11" sheets that seem to me very similar in proportions to a two-page spread from the 5.5" x 8.5" sketchbook I tested previously (see Road Trips, Hot Rods... and a Road Test for my observations and images from that review). So, I decided to mock up a series of double-page spreads based on my recent trip to the Gulf Coast utilizing a variety of wet and dry media, including: pencils, fountain pens, fine liners, watercolors, and color pencils. What follows are some of those sheets, my notes, and observations. I hope you find them useful. 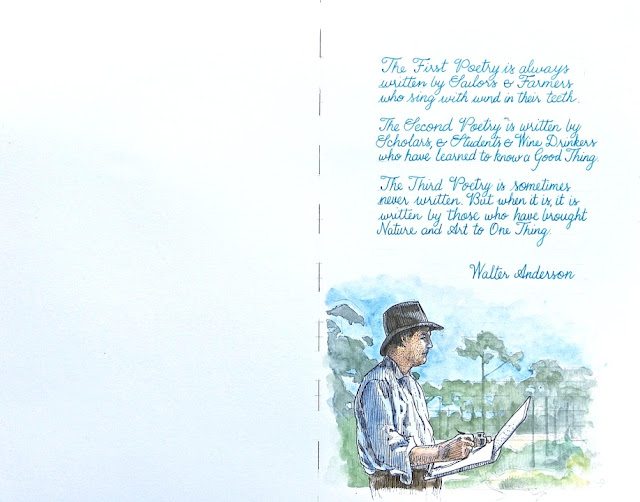 the mockup of the inside front cover of a sketchbook (I always begin each sketchbook
with a quotation, this time from Ocean Springs' native artist/naturalist)

The Zeta Series paper is the same weight as that in both the Beta and Delta Series but, because it has been run between rollers, it is thinner. (The term "Hot Plate" has its origins in the practice of ironing the paper smooth or running the still-damp paper sheet between two heated rollers under high pressure.) Zeta is actually smoother than Arches HP watercolor paper, though not quite as smooth as a Plate finished Bristol paper. 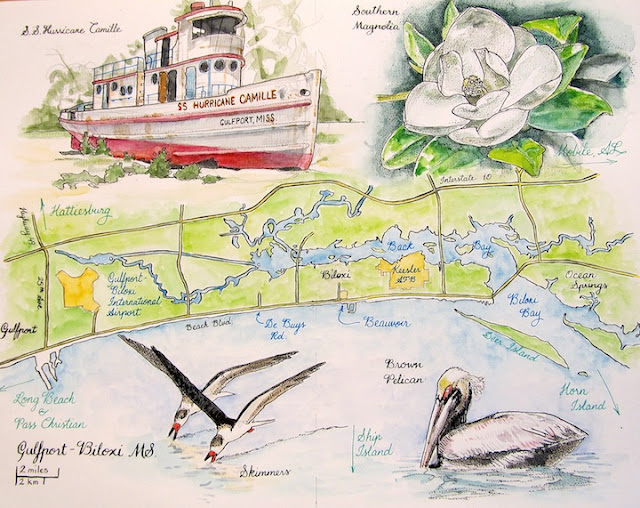 There is just enough "tooth" to the paper's surface to provide feedback and the paper responds wonderfully to the most delicate nuances with pencil. Graphite bonds well with the paper's surface but does not build up as rapidly as on the Beta. (When working across the entire surface of the Beta I found it expeditious to use a sheet of barrier paper between my hand and the graphite to avoid excessive smearing.) Thorough erasing was readily possible on the Zeta. A firm pressure on a vinyl eraser would remove all signs of a pencil's mark without disturbing the paper's fibers or marring the surface in any way.

I used a wide range of pens and inks during my evaluation of the Zeta -- including four fountain pens loaded out with both water-soluable and indelible inks, and a variety of Micron permanent pens. As on the Beta paper, the Micron pens performed flawlessly and without fuss. 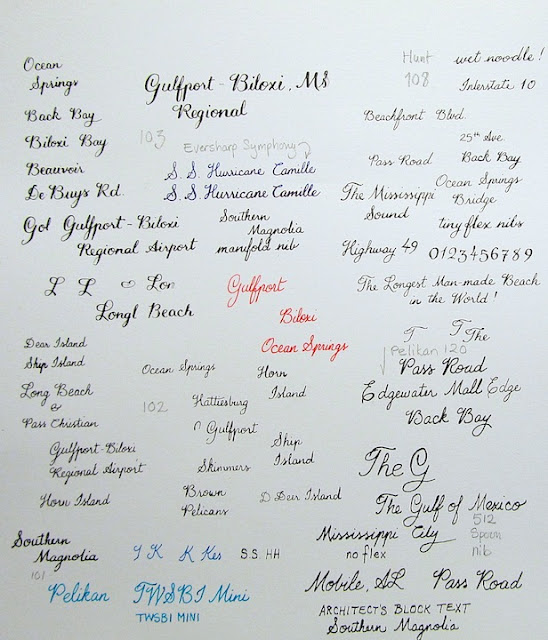 If you read my Beta review you will know that one of my few concerns about that paper was that the toothiness of the hard Cold Press surface might be a bit too abrasive for long-term use with valuable (gold or platinum) fountain pen and dip pen nibs. Well, Stillman & Birn has certainly resolved that issue with the Zeta Series. (Viewed with the aid of a high-powered loupe, the surface of the new Zeta paper has a very fine, even felt-like appearance.) I got just enough feedback while drawing with a Pelikan 120 (the first pen I used) to feel free to use my widest pressure range -- producing delicate details and bold shadow effects. The paper also responded equally well to my semi-flex Eversharp Symphony -- the pen that raised concerns about excessive abrasiveness when used with the cold press Beta and Delta Series papers. (This time, no concerns.)

Emboldened by my results I achieved with fountain pens, I decided to push the paper to the max and see what could (or couldn't) be achieved with dip pens -- which, because of their general lack of any iridium tipping material, are notorious for burrowing into paper surfaces on upstrokes and occasionally even skipping and splatting ink during sidestrokes.

The first dip nib I tested was a  Hunt 512 "spoon" which, because of its curved nib, navigated the paper in all directions without fault or complaint. Next was a nice flexible Hunt 103 that did quite well as long as I used gentle pressure on the upstroke and "listened" to the nib's feedback. Equally good results were achieved with a stiff Hunt 102 & 101, and truly remarkable hairlines were obtained with the lightest of pressures using a Hunt 108 "wet noodle".

Thanks to the weight of the paper are the uniform strength of its sizing, the buckling or warping of the paper experienced after the application of watercolor washes was minimal. 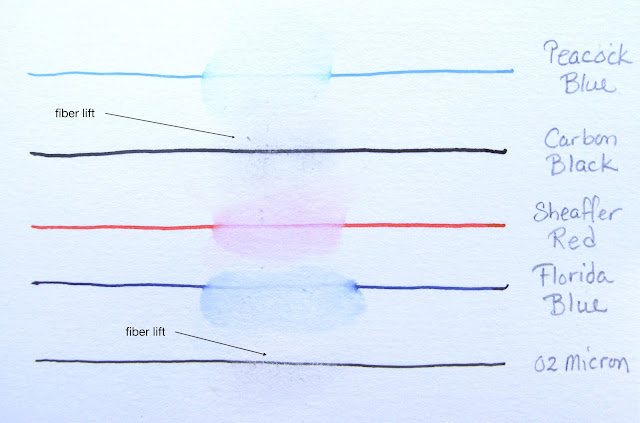 One cautionary note: Zeta is a marvelous paper for what it is. It's pH neutral, acid free, chloride free, and 87% alpha cellulose. It's archival and it's resilient. But Zeta is not long fiber rag paper. And I discovered (during a "lift test" of permanent inks) that it doesn't take much scrubbing with a watercolor brush to start lifting small (actually very small) fibers from the paper's surface. So, when "lifting watercolor or water-soluble inks I recommend caution. And, at the first sign that the paper may be starting to break down, you might want to stop.

On the plus side, the paper seems to be so heavily sized that -- once dried -- the tooth of the paper was only raised slightly (to about that of Arches HP paper) and the integrity of the paper did not seem to be compromised. (However, I prefer to err on the side of caution and would not try lifting color in the same spot a second time.)

The paper's heavy sizing also meant that lighter inks, like the vintage Sheaffer Peacock Blue, sat on the surface and retained their full brilliance, while the lack of feathering meant that a line laid down by an Extra Fine (or finer) nib remained equally fine as it dried.

results after a single wetting and lift in the center

I also performed a lift test with a selection of my watercolors (not an exhaustive selection, but a good cross sampling of artist's grade pigmented colors) -- and I wanted to determine if my choice of brushes might have had anything to do with the paper lifting that was experienced during the ink lift test. So, for this test I applied color with the same water brush I'd used for the ink lift test. But, instead of using the water brush to lift as well, I switched to a soft squirrel mop to re-wet the center section of each color sample and then used a clean, dry rag to mop up the color. The results were truly remarkable -- and no fibers were lifted this time.

The Zeta Series is set to be offered in the same sizes and binding options as both the Beta and Delta Series, although I'm still holding out hope that at some point in the future S&B will decide to add a hardbound landscape format as in the Alpha Series. (What can I say? I think there's a great deal of creative potential for the "oriental" elongated horizontal or vertical double-page format.) 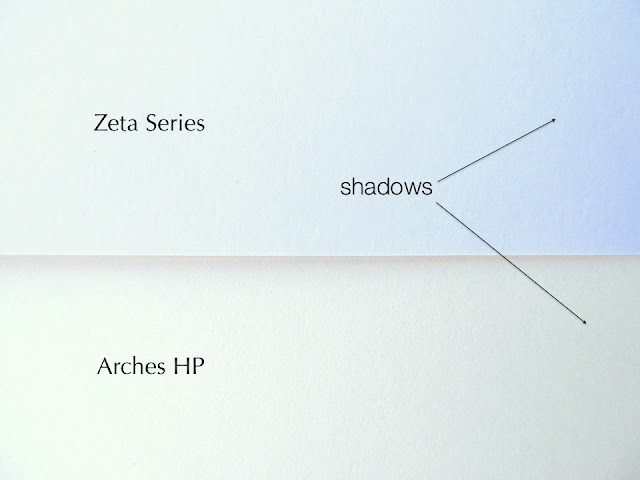 Zeta is brighter and cooler than Arches HP

The Series was originally scheduled for release in mid-January 2013. However, Michael recently stated that, due to certain unforeseen circumstances (given that Stillman & Birn's offices are located in New Jersey, I wouldn't be surprised if Superstorm Sandy was one of them), distribution might be set back to sometime in February. Either way, it's not too early to check with your favorite art supply dealer and see how soon you can place your order for a Zeta of your very own; you're certain to enjoy the results!

And, until next time, happy sketching everyone!

Blue inks update: the blue ink test samples that have been in the north-facing window for 4 weeks now are still showing no marked fading (quite remarkable). But I do have one unusual development to share with you this week. 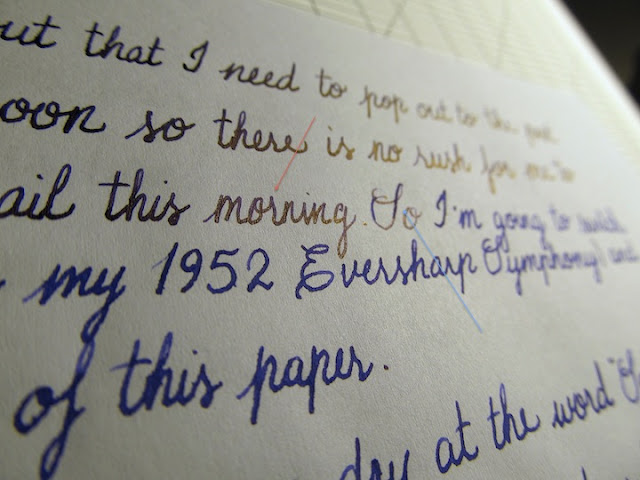 old ink (red arrow) appears black straight-on but has a red sheen if viewed from an angle, while the new ink (blue arrow) is more intensely blue (both the "old" an "new" are from the same bottle)

During a routine writing test of Waterman's vintage Florida Blue I discovered that (as my test pen neared the last of it's ink) the writing got darker and (when dry) develops a noticeable reddish sheen. This phenomenon was observed and recorded while I was in the midst of writing a letter. Mid-word I ran out of ink and noticed, upon refilling the pen and resuming my writing, that it looked like I was using two completely different inks. I can only speculate that, over time, the dyes that make up Florida Blue separate out in the pen's bladder. (It is worth noting here that the pen in question was obtained with a brand new ink sac installed and Florida Blue is the only ink to date that it has been loaded out with.)
Posted by Earnest Ward at 1:38 PM