In Part I we met some of the songbirds that call our little stretch of the Clear Fork of the Trinity River home during the winter months. In Part II we took a brief look at how one can approach observing and sketching birds. And in Part III I'd like to wrap things up with a look at the final stages of the two-page spreads. 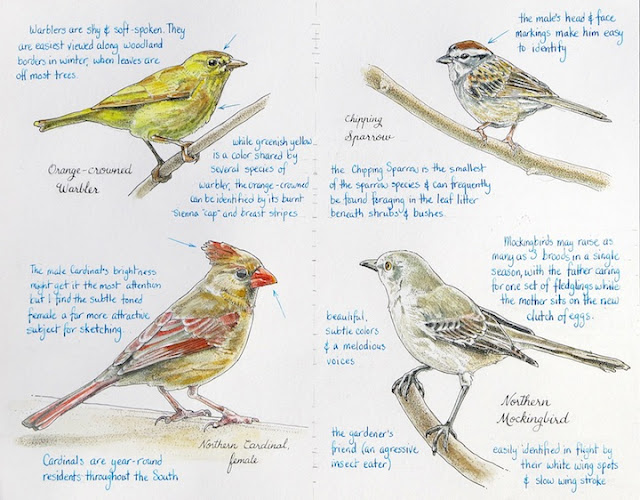 The final state of the songbirds plate saw the addition of of arrows that point out key identification features or traits, and personal observations about the species. (I frequently carry a pocket-sized notebook in the field and jot down these observations even when I'm not sketching.) 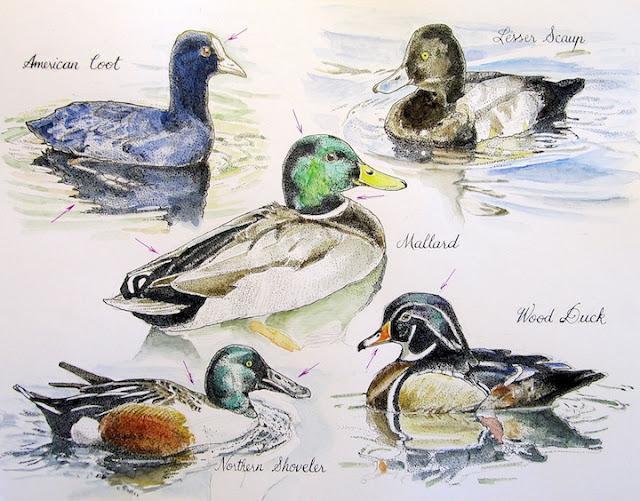 We have even more waterfowl in residence this time of year than song birds. So, I felt that I had to add an additional species to this plate. Unfortunately, that doesn't leave much space for annotation. (Maybe I could put my notes on the facing page.) The coots are easily identified by the white "plate" on their forehead, their lobed (rather than webbed) feet, and by their guinea fowl-like walk when they're out of the water. They're also our fastest growing population -- going from just one pair three years ago to some two dozen this.

Mallards are actually year-round residents, although their population does swell this time of year. They're the largest of our wild ducks and are easily identified by their iridescent green head, the white band around their neck, a flash of iridescent blue that is frequently visible on the wing, and their loud "laughing" call.

The Lesser Scaup is our smallest resident (perhaps half the size of the mallard) and is SO much fun to watch as he pops beneath the surface to feed and then resurfaces 10-12 feet away. (They seem to swim much faster underwater than on the surface.)

The Shoveler is also a relative newcomer to our little ponds. In low light it is easily identified by its elongated beak. While a superficial look might cause it to be confused with the mallard (and the two are similar in size) the snowy white chest and auburn-colored flanks of the male can easily be seen even at longer distances. Shovelers can also be easily identified during feeding, when they often gather in groups, extend their necks forward and dabble the water with their beaks as the entire group (sometimes a dozen or more) swim in a circle.

And the diminutive Wood Duck is certainly the most colorful of our spring residents. They're easy to attract if you put out nesting boxes. I find that they average 9 chicks or so in every brood. (And it's tons of fun watching the mom heard the youngsters about while dad keeps a keen eye out for predators and other threats to his young family.)

I also have three other individual bird studies that are not quite complete. So, check back in a few days and look for additional images of Widgeons, Pintails, and inland Gulls. 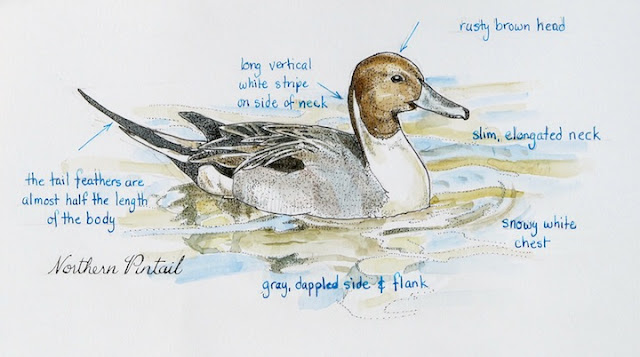 and, as promised, here is the first of the addenda -- a brand new arrival
to our pond last year, with just two mating pairs this year

As noted before, all of these works are being produced on Stillman & Birn's new Zeta Series paper, which has easily handled everything I've thrown at it (from pencil, to fountain pen, to dip pen, to watercolor) without any problems or difficulties whatsoever.

Well, the weather is turning decidedly spring-like here in North Texas -- some much needed rain (which will be great for the wildflowers in a month or so), but mostly mild temperatures and lots of sunshine. My daughter has been asking if we could do a few sketching safaris as soon as she's over the flu. So, starting next week I think we'll say goodbye to the wildlife for a bit and try something new for you. Hope to see you then.

Oh, I'd like to ask a little feed-back favor; if you would be interested in seeing more tutorial postings (possibly with the occasional video demonstration) here please take just a moment to leave a comment to that effect. (And please feel free to invite interested friends to do the same.) If there's enough interest, I'll do my best to share some new methods and techniques with you.