Spring is now well under way in north Texas. The House Sparrows have fledged their first brood of chicks for the year. And most of our winter population of waterfowl have quietly departed for their summer homes to the north. But life (in all its glory) goes on and new plants, insects, and birds are appearing each and every day. 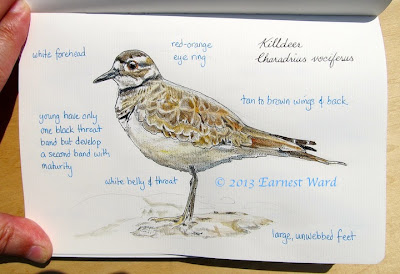 the G. Lalo paper handles a wide variety of media -- including pencil, inks, and watercolors -- with ease

Quietest and (in our neighborhood) rarest is the solitary pair of Killdeer that have taken up residence along the gravely shoreline at the south end of the main pond and in the freshly mowed, adjacent field. I for one am hoping they'll establish a nest (and that the mowers leave them alone!) It would certainly be a delight to add a sketch of one of their long-legged balls of fluff. 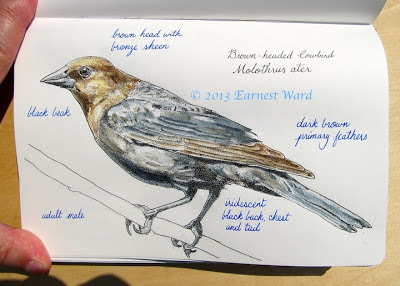 remarkably little buckling is experienced when working with wet media

Flocks of Cowbirds have also arrived and, as I watch them forage their way across the fields, I can't help wondering if they time their arrival to coincide with the lawn mowers. Of course, a lot of folks are critical of Cowbirds because of their predatory laying. But it's the way Nature planned it. And, since I have seen no evidence to indicate that the hatchlings threaten their nest mates, I personally take no exception. 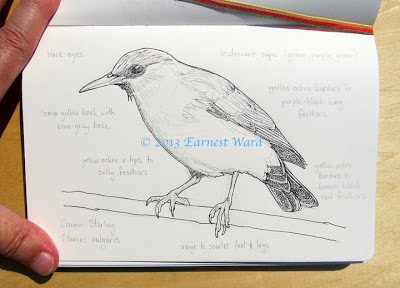 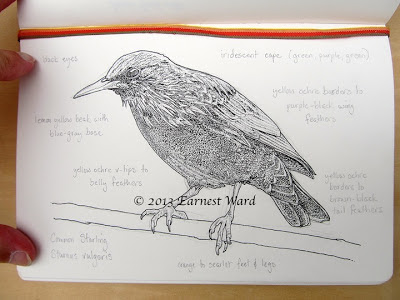 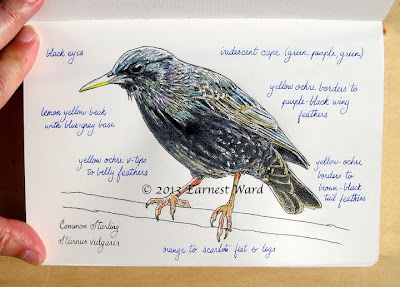 
As the first signs of new foliage appeared on our trees this spring, House Sparrows took up residence in  every nook and cranny of our carport's metal framework. Sitting in my studio after the first brood hatched, I was treated to a chorus each time one of the parents arrived with a fresh, juicy grub or caterpillar for their forever-hungry young. But now the first brood of spring has fledged and most of the Sparrows have given way to a new (and equally vociferous) group of Common Starlings -- who have shown up in small flocks and by ones and twos rather than the massive flocks that wow us with their aerial dances in autumn. 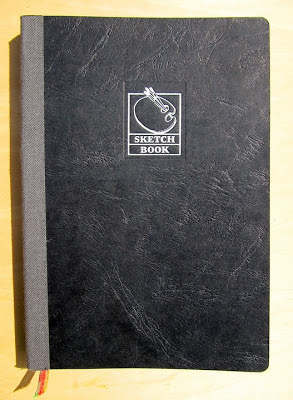 Tech Note --
This week I'm playing with mixed media in the Exacompta Sketch Book from Exaclare -- certainly one of the most unique, eye-catching sketchbook/journals I've come across due to its marvelous G. Lalo Verge de France laid paper (which is manufactured at the Schut Mill in the Netherlands) and the fact that the paper edges have been "silvered" to protect against both moisture and atmospheric contaminants. Unfortunately, the Sketch Book is not currently offered in the U.S. but I have been informed by Karen Doherty (Exaclare's Vice President for Marketing) that it may be reintroduced. (I for one certainly hope so, as I know of no other sketchbook marketed in this country that is constructed with laid drawing paper.) 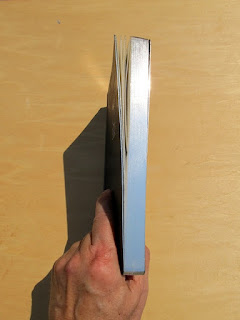 the beautiful "silvering" may be unique in sketchbooks
(I've never encountered it before)
Posted by Earnest Ward at 2:33 PM