Friends and Neighbors (Of The Garden Variety)


"When we try to pick out anything by itself, we find it hitched to everything else in the Universe."
My First Summer In The Sierra (1911)
John Muir 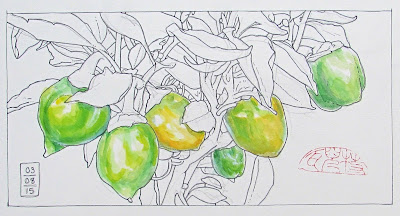 One of the fun things about sketching in the garden is that, over time, you learn not only about individual plants, and bugs, birds, and even the soil and weather; you begin to learn about how they are interconnected, and about nature's cycles. 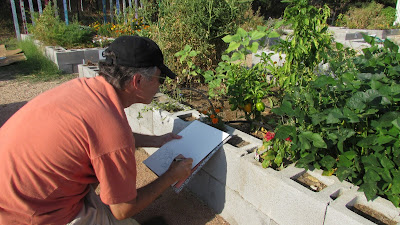 sketch hunting amongst the fruits and veggies

During July I went to the veggie garden just after sunrise each morning (in part to avoid the triple-digit heat) and was thus treated last week to the spectacle of a dragonfly swarm in the park; the vision of sunlight sparkling off the wings of hundreds of dragonflies as they patrolled the park's open field was magical!

Since I'm growing veggies for our table (as well as for my art) I'm avoiding the use of harmful (i.e., toxic) and that, in turn, has led me to seek out natural remedies for the occasional pest problem. (Of course, I'm not averse to sharing a little of our bounty with the occasional insect if they're willing to pose for me and/or they are likely to morph into something interesting. (And sometimes the little critters are saved by my tendency to put my art ahead of their destruction.) 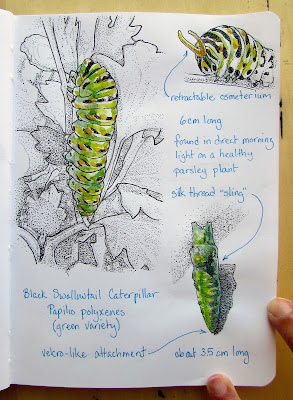 the retractable "horns" came as a surprise

A case in point: one morning I found a particularly large and colorful caterpillar on one of my neighbor's quite lovely parsley plant. Should I destroy the ravenous trespasser? Of course not! I carefully put it in an empty pencil box (and, in doing so, learned something quite delightful about its natural defense mechanism) and brought it home to draw. My intension was to release it somewhere near the house (and away from the community garden plots) the next morning. But, overnight, the caterpillar took action of its own -- morphing into an equally picturesque chrysalis. So, now it's residing in my kids' butterfly tent and we're checking it a couple of times a day and waiting for a Black Swallowtail butterfly to emerge. 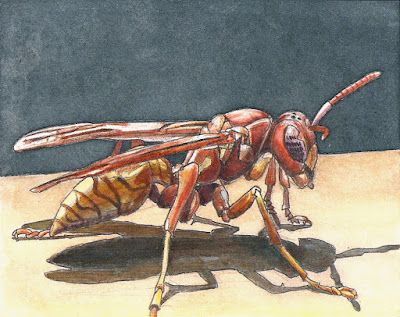 my pest control partners (interestingly, only the females can sting)

Of course, no pesticides means that I have to maintain a vigil for an excess of pests, picking off the young caterpillars on my kale and tomatoes as they arrive in waves. But it also means that I needn't worry about poisoning my pollinators -- be they honey bees, carpenter bees, butterflies, moths, et al. And, fortuitously, nature also provides me with several amazing allies! For example, while watering the patch yesterday (and harvesting a bag full of cherry tomatoes and peas) I noticed that brown paper wasps had begun to visit my plants. At first I suspected that they might be collecting building material for nests. But more careful observation gave me a delightful surprise; they were inspecting the underside of leaves and, whenever they found one, removing caterpillars! I don't know whether the caterpillars were destined for the wasps' larders or brood chambers, but it certainly was an amazing example of how it's all "hitched to everything else in the Universe." 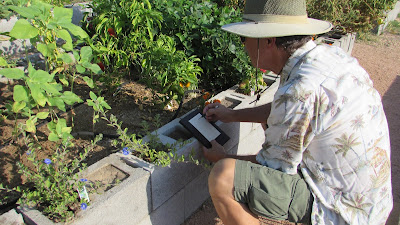 I hope you have an amazing and delightful week, and that you'll join me again next week (when, weather permitting, we'll do some plein air painting.) See you then! 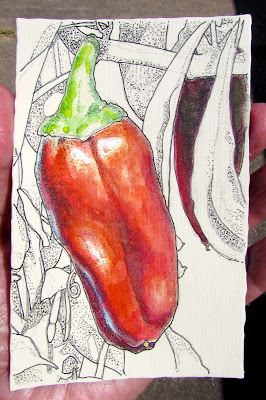 the heat warped the card, but pressing
for a few days should take care of that

I am delighted to announce my first two sponsors for this year's artist residency. As with my previous residencies in North Cascades National Park, Sakura of America and Ampersand Art Supplies have generously offered to provide material support. My heart-felt thanks goes out to the folks at both.

If you haven't done so yet, please visit my Kickstarter campaign page, select a pledge level (and reward) to your liking, and share on Facebook and Twitter. Thanks! 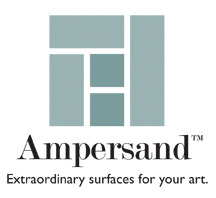