Court of the Patriarchs, Zion NP 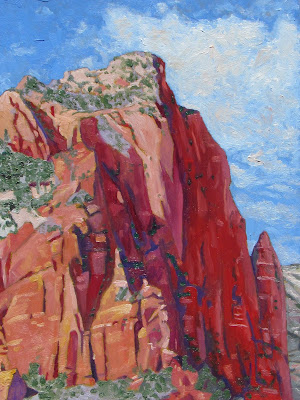 Zion National Park is blessed with a plethora of scenic marvels. Some are easily accessible ( the Watchman, for example, can* be viewed without leaving your car) while others (like the view from atop Angels Landing) require strenuous, but exhilarating, hikes. With its own shuttle stop (just two stops up-canyon from the Human History Museum or one stop down from the Lodge) the Court of the Patriarchs is decidedly closer to the Watchman in ease of access. 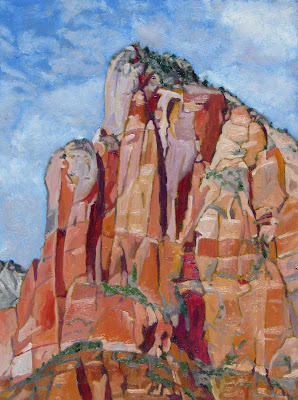 For the least obstructed view of the Patriarchs and the Sentinel visitors can opt to hike the very short, only slightly strenuous, east trail up to the observation point (which places the visitor above the tops of the surrounding trees), walk to the river's edge from the shuttle stop, or hike to the CotP via the Sand Bench Horse Trail (for dramatic vertical views from the foot of the cliff walls.) 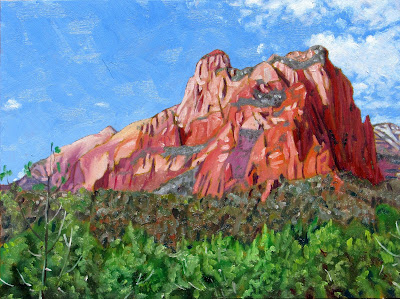 The Sentinel, Court of the Patriarchs, color sketch,
6"x8", Gamblin oils on Gessobord

Mornings (just after the sun rises above the canyon's east wall) offer the most colorful and dramatic lighting. Late afternoon will find most, if not all, of the Court in shadow. And there are sometimes some very interesting effects to be seen after rain showers and thunderstorms (when whisky clouds often dance about the peaks.)

* I say "can" be viewed from your car (during those times when Scenic Drive is open to private vehicles.) However, exploring the park on foot, by bike, or via the free shutter are far more relaxing and rewarding.

Much more to come!