I have always been drawn to "lost treasures", big and small. For me the most memorable scene in Indiana Jones and Raiders of the Lost Ark was just before the end when the Ark of the Covenant was wheeled into the bowels of a huge government warehouse (where it was certain to be buried beneath other nondescript crates and lost in bureaucratic paperwork). A few years later I watched with fascination a PBS special about the Vivier Collection -- a huge collection of Persian miniatures and Japanese prints amassed by the famous Parisian jeweler during the fin de siecle, shipped to the USA for safekeeping during the early days of WW II, and then "lost" for several decades. And, as a lad growing up in England, I was always intrigued by the hidden "treasures" (always strictly off limits to my siblings and myself) that lay in our attic. (Our landlady had moved to India some years earlier and left her household belongings stored in the attic.) 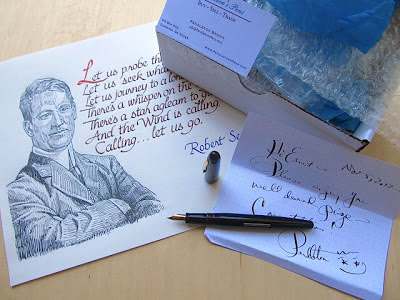 So when (at the end of a month-long calligraphy contest on the Fountain Pen Network in October) I had the opportunity to choose a prize from among several donated pens, I chose the NOS (New Old Stock) Eversharp Symphony -- a beautiful pen (with a fine 14k semi-flex nib!) manufactured some 60 years ago but that had never been inked (and it was all mine for simply doing what I love to do!) 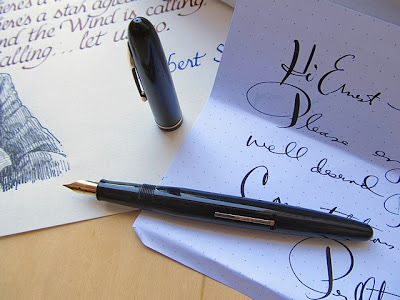 Three days after I posted my choice of prizes on the forum I received a box containing a delightful note from Pendleton Brown (nib meister, contest organizer, and all-round nice guy) and my very carefully wrapped, shiny new pen -- and I was immediately struck by how unusual it was to be filling a pen for the first time that was manufactured when Dwight Eisenhower was president. 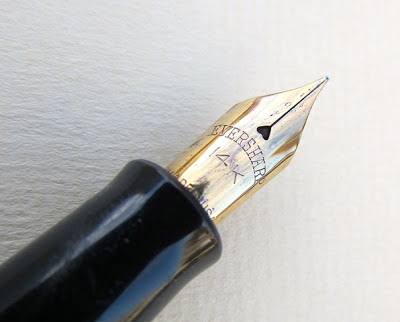 the spotless heart and soul of the Symphony 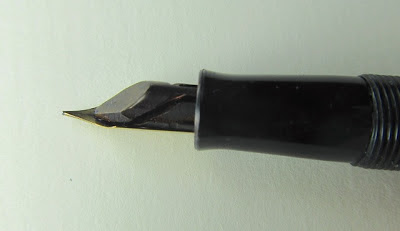 one of the most unusual feed designs I've seen (and it works beautifully!)

To celebrate the special occasion I decided to fill my little gem with some vintage Waterman Florida Blue and take it for a test drive. First observations: smooth! not a hint of scratchiness and a fine/extra fine line sans pressure with just the right amount of flow; inverted, the pen produces the finest hairline of any pen in my collection; and, with a modest amount of pressure, the nib readily opens up to a very reasonable medium/bold line. 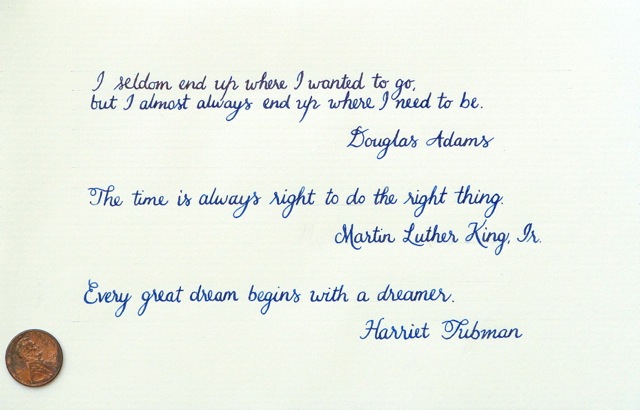 
I'm still many, many hours of practice away from the point where my new pen will feel like an extension of me. But we've already inked enough paper together for me to know that any time we spend together will be sublime. 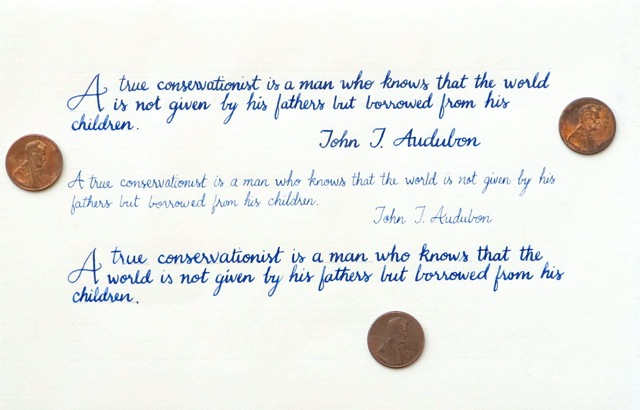 the results, when I inverted the nib, were amazing (extra extra fine?)


A Few Parting Thoughts About NOS: In the late 50s and early 60s the fountain pen industry was dying. The ball point pen had been developed during WW II and, as post-war society accelerated into first the Jet Age and then the Space Age, even trendy new designs like the Parker 51 could only postpone what was seen by many as the inevitable.

As sales slumped drug stores and department stores began pulling fountain pens from their shelves to make room for merchandise that would sell, put the pens in storage... and forgot about them. Jump ahead half a century and suddenly the fountain pen is making a comeback, new pens are being manufactured, limited edition pens are fetching a premium price, vintage pens are sought after for their craftsmanship and exceptional nibs (nibs that surpass anything being manufactured today)... and someone, somewhere finds the first batch of New Old Stock -- those brand new pens that were stuck away in storage half a century ago because no one was buying them any more.

So, if you're in the market for a new, never-been-inked pen and find the idea of purchasing something that comes with its own history (and very possibly a smooth-as-glass 14k nib) for no more than a modern, modestly priced, entry-level pen, think about attending a pen show in your area or Google "nos fountain pens" and see what turns up.