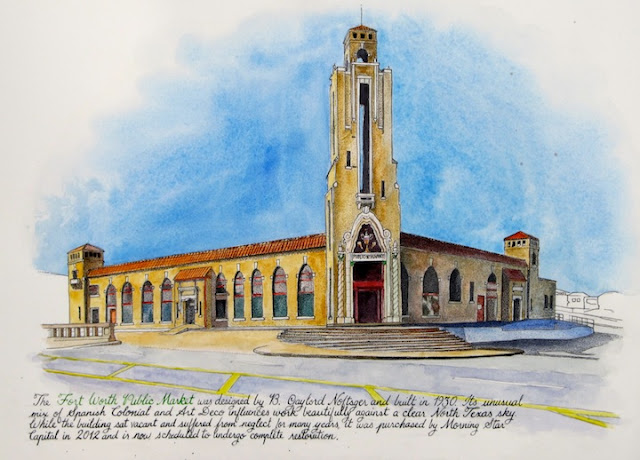 Texas is a big state. The driving distance from Los Angeles, CA to El Paso, TX is shorter than the driving distance along Interstate-10 from Texas' western border to its eastern boundary. Texas also has some big attractions -- some well known the world over and drawing thousands of visitors each year (places like the Alamo and San Antonio's River Walk).

But there are also hundreds of gems that are known only to a few -- neighborhoods that were very tony in their heyday but (like Sleeping Beauty) quietly slipped into a deep slumber when they fell on hard times, one-off architectural treasures tucked away in out-of-the-way corners of larger communities, towns that went dormant after the coming of the Interstate system, and tiny communities that were never more than the intersection of two Farm to Market roads. I call these forgotten and undiscovered gems "Little Texas" and in this new series I'll endeavor to seek out, sketch, and share some of the best with you -- starting this week with the Fort Worth Public Market. 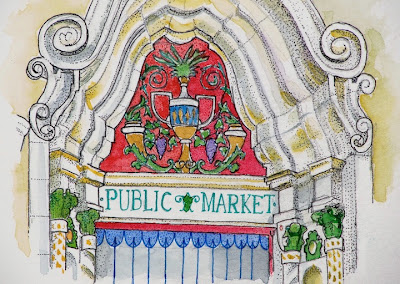 The Public Market sits in what is today a quiet, nondescript neighborhood that sees little car, and even less foot, traffic. (On the bright, sunny day I sketched it I counted fewer than a dozen vehicles and maybe two or three pedestrians who passed by.) B. Gaylord Noftsger's design utilizes an eclectic blend of Art Deco stained glass, Spanish Colonial polychrome tiles, and red framed windows and doors that are particularly appealing to the eye when set against the prevailing clear blue skies of north Texas). Built by John J. Harden in 1930 as a central marketplace for area farmers and retailers, the beautiful building was challenged by the economic hardships of the Depression and finally closed its doors in 1941.

If you happen to find yourself in the area of Henderson St. and Rio Grande Ave. in Fort Worth (just south of Lancaster Ave. in the downtown area) keep an eye out for the Market's distinctive tower. (And don't forget to bring your sketchbook!)


In Part 02 of Little Texas I'll visit an enchanting neighborhood that has slumbered mostly forgotten and neglected for nearly a hundred years, but that was one of the most affluent and beautiful in the city at the beginning of the last century. I hope you'll join me then.