Botanizing (and Other Adventures) 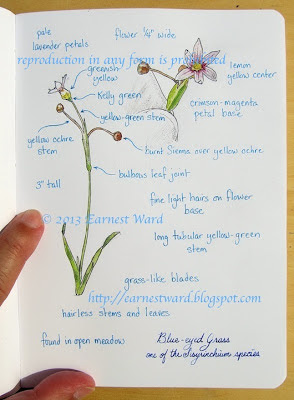 This morning (as has been my practice for the past few weeks) I took a walk around our pond and across the field, observing the day-to-day growth of this year's crop of wildflowers and watching for any new (to me) "minuscules" that might have popped up overnight. I was rewarded with a lone plant of about 7.5 cm high with asymmetrical violet flowers and thick, spear-shaped leaves. 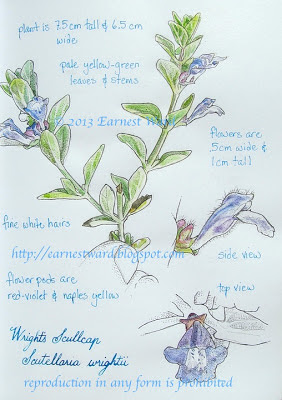 Well, after I had completed my sketches and notes, I headed home and began my research into the identity of my little mystery plant. A quick check of my favorite online reference sites informed me that my "discovery" was Wright's Scullcap (Scutellaria wrightii) and that it had first been identified by one Charles Wright shortly after the establishment of the Texas Republic. 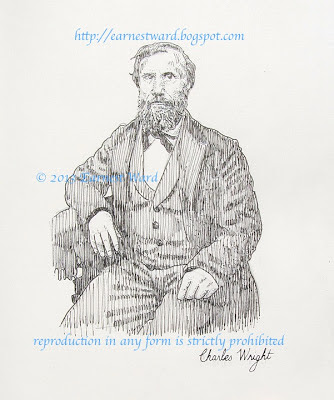 the intrepid adventurer himself
ink on G. Lalo laid paper

Well, given my penchant for tangents, one thing led to another. And, before long, I was researching the life of this "adventure botanist" and thinking to myself, "Wow, this guy was a 19th century Indiana Jones!" The highlights in brief: after completing his studies at Yale Mr. Wright started out as a teacher for a plantation in Natchez, Mississippi -- only to see the plantation fail two years later. Mr. Wright then traveled to Texas, where he collected botanical species from 1837 to 1951. It was during this period that Asa Gray (the renowned Harvard University botanist) secured Wright a position as botanist with a military expedition scheduled to explore the Rio Grande Valley. During the expedition's voyage from Galveston to San Antonio to El Paso, Charles Wright actually walked 673 miles and collected 1,400 specimens (which he forwarded to his friend Gray).

In 1851 Wright joined the survey of the Mexico-US boundary (as the expedition's "botanist and assistant computer"). In 1853 he joined the Ringgold North Pacific Expedition for some botanizing in Madeira, the Cape Verde Islands, the Cape of Good Hope, Sydney, Hong Kong, coastal Japan, the Bering Straights, and along the California Coast. After the conclusion of the North Pacific Expedition, Wright traveled to Nicaragua (where he once again indulged himself in a bit of botanizing) before returning to his family home in Wethersfield, Connecticut, for a "rest".

Wright's final botanical adventure took him to Cuba in 1856... and lasted for the next 11 years! (Definitely not your average sketchcrawl.)

And, after reading about all that, I came away with the Indiana Jones theme song stuck in my head and wondering: if we taught our children more about the exploits of people like Charles Wright (or Alexander von Humboldt, or Jeanne Baret) could we perhaps stimulate a new generation's interest in science? 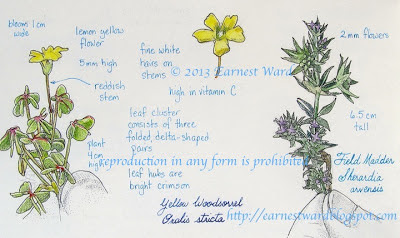 Postscript: I began work on a two-page spread of minuscules this week and mentioned on Facebook that my first find was a Yellow Woodsorrel, which can be boiled down to produce a fine orange dye. Well, serendipitously, my second find turned out to be Field Madder, which can be rendered into a rosy red dye! (Stay tuned for an update to the post just as soon as the second half of the spread is complete.)