Sunshine, Thunderstorms, and Flash Floods -- Oh My! (Week 1 in Zion)

My apologizes for the tardiness in getting my first Zion post online but, as I’m sure you can imagine, I’ve been very slow to take time away from exploring and art making to sit in front of a computer screen (and can only do it for brief periods before once again surrounding myself to the call of the wild.) 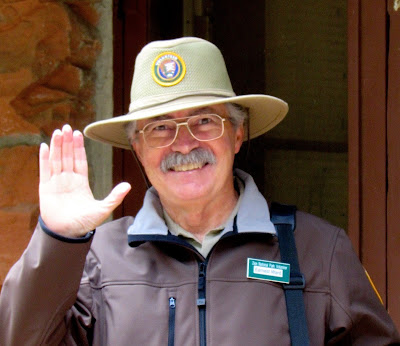 yea, I was disappointed too when they didn't give me a ranger hat

My drive to "work" took three days and covered parts of four states... and was marvelous! 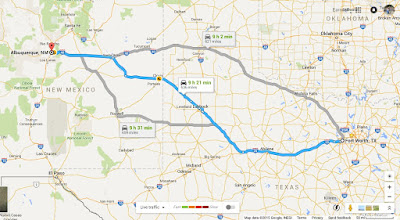 Day 1 was the longest, and most stressful (last minute double checking to avoid arriving at our destination only to discover something vital was left on the dining room table) although the stress usually gives way to euphoria within an hour of leaving home. The drive from Fort Worth to Albuquerque over rolling woodlands, through table-flat cotton country, and into Texas high desert scrub country. In New Mexico we passed through Billy the Kid country before we joining I-40 for the nighttime run into Albuquerque (with some very decorative lighting effects along the roadway and on overpasses.) 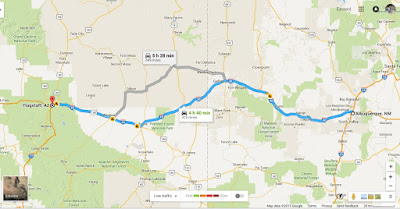 Day 2 had us awaking to the high desert scenery of the city... and discovering an unexpected classic car collection right across the street from our hotel. 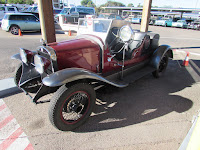 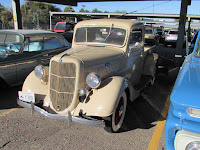 Albuquerque to Flagstaff had us skirting the edge of the Four Corners area Indian Nations with their beautiful desert landscapes and sparsely populated vastness. 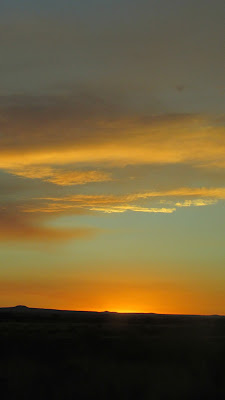 Arrival in Flagstaff was another after dark event, though much earlier than that into Albuquerque had been. 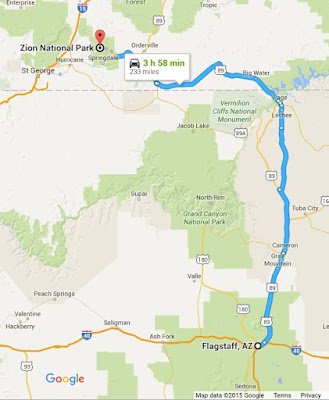 the last leg (up hill all the way)

Day 3 had us awakening in a mountain forest, descending through scrubland hills, and entering first the flat and then canyon country of the northern Arizona Navajo peoples. 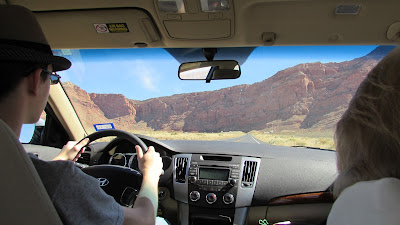 After passing through Page (and skirting briefly the edge of what I think is the most picturesque lake in America — Lake Powell) we began a series of climbs. The most notable began just after the Highway 89A turn off and was marked by a breathtaking turnout, where we stopped for the amazing views… and the kids ended up purchasing handcrafted jewelry from the four venders who maintained stalls within sight of their homes on the plain below. 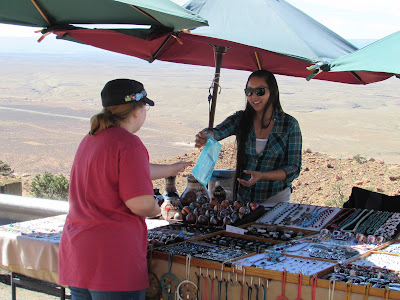 shopping for jewelry on a mountainside was a delightfully serendipitous event

After the turnoff onto Route 9 at Mt. Carmel Junction we drove through rolling farm and ranch land before entering Zion NP through the east gate. Then came the amusement par ride: a mile-long tunnel that was so dark (no interior lighting) that I thought my headlights may have been burned out, followed by the most picturesque series of switchbacks I’ve ever driven in the US. Delightful! 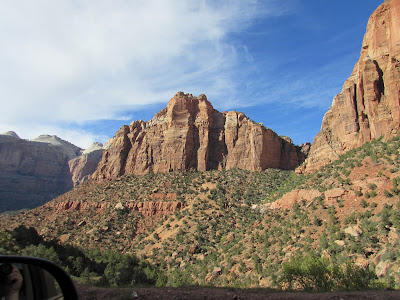 beginning the switchback descent into the canyon

Met Gustava Hotskins, the park’s acting AiR Coordinator at the Human History Museum, received my White Pass (for driving a private car above Canyon Junction), got checked into the Grotto House, and dropped off all my gear.

At this point (thanks to the discovery of two folding cots in the house) the original plan for Misha and the kids to make the drive back to Flagstaff for the night was scrapped and we drove into Springdale for a very enjoyable patio dinner, followed by a visit to the Sol Market to stock up on provisions for my stay.

And, because the return to Flagstaff was cancelled and we found ourselves returning to the Grotto House after dark, we were able to come to the aid of a couple who were out on the no-lights Canyon Road after dark with no lights of their own… and having missed the last shuttle back into Springdale. After dropping off my groceries, wife and daughter, my son and I gave the couple a lift back to their hotel And, en route, learned that they had lost track of time during their climb to Angels Landing… when he stopped to propose to her. Thankfully, by the time we dropped them off the stress of trying to make their way in the dark had given way to relief and laughter and, hopefully, a memorable story to tell their grandchildren. (She said, “Yes.”) 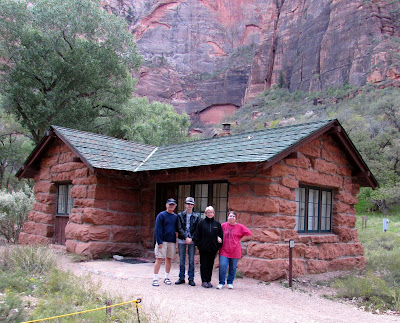 our last photo together till my crew returns for me

Day 4 began with me seeing the family off to California and then I was out and about exploring — mouth agape at the shear beauty and vertical scale of my new surroundings. It seemed that, no matter which way I turned, there was a breathtaking scape to be captured on paper or panel! 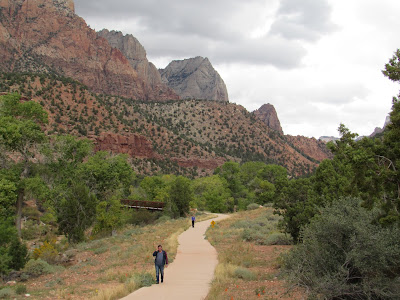 the Pa'rus Trail between the Visitors Center and Canyon Junction

Day 5 — up well before dawn and work began in earnest. (What, you didn’t think I was going to work that in somewhere?) The canyons are a non-stop series of vistas. But, as a general rule, those on the west wall are going to be best lit in the morning while those on the east wall will be most dramatic in the afternoon. And some views — like the Watchman and the range south of Canyon Junction — are best during the “golden hour” just before sunset. So, I am out: identifying subjects I most want to sketch and paint, determining their compass bearing from my chosen vantage point, identifying nearby geological formations that may cast unwanted (or desirable) shadows, and determining the best time of day to capture the scene on paper or panel.

Day 6 — more scouting and mapping this morning — first on the river near the house and then up canyon.

To minimize pollution, and curtail traffic congestion, in the canyon Zion NP and the town of Springdale have implemented two free shuttle systems — one running from the park entrance to the top end of the canyon, and one running from the bottom end of town to the park entrance. Add to that the bicycle the Park Service has provided my during my stay and I’m free to explore and discover every subject and vantage point on the canyon floor.

Popped down to the Lodge to introduce myself and to log onto their wifi (The folks at the Zion Lodge have kindly offered me VIP access to their wifi network for the duration of my stay so that I might get these weekly posts out to you.) and then hiked the half mile Grotto Trail back to the house to the sound of thunder rumbling in the distance. (It echoes majestically off the canyon walls and seems to go on forever.)

As I reached the house the sunny sky went dark and, within 10 minutes, the bottom fell out as a torrent of rain cascaded into the canyon… punctuated at the end by a hailstorm that peppered my windows and left the Grotto area carpeted in white. The surrounding canyon walls also sprang a dozen or so (in this area alone) new waterfalls with torrents cascading the 2000 feet or so to the canyon floor. It was all so exhilarating! (Of course, when a second storm struck in the middle of the night and I could hear the roar of the river — but couldn’t see the river’s edge — “exhilarating” was no longer the descriptive that came to mind.) 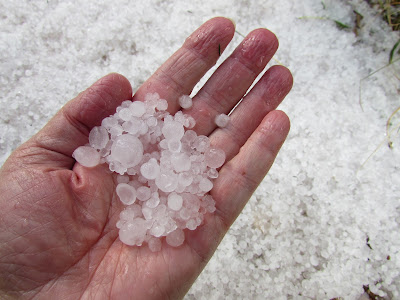 Day 7 — the first week has flown by! I’ve discovered and experienced so very much already, with so much more yet to come. The summer warmth, with temperatures in the mid 80s, that greeted us has given way to fall temperatures that begin the day in the 50s. The sky alternates between brief glimpses of sunshine and overcast. But the morning is dry and OK for exploring (as long as I take my rain gear long, just in case.) And the afternoon showers are moderate.

Up and down the canyon maintenance crews are out in force clearing the roads, trails (and lodge parking lot) of the red, clay-like residue of yesterday’s runoff. And I’m busy on yet another study, and enjoying a nice culpa tea. 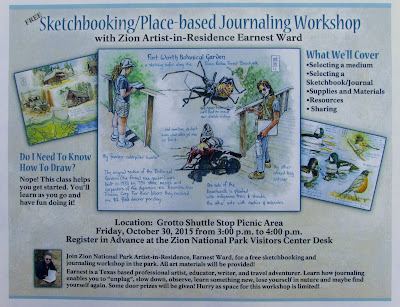 NOTE: Future posts from Zion are likely to be briefer as I intend to spend more time afield. But I think you’ll find the content, and especially the images, interesting. Cheers!