Mukuntuweap means “straight up land” and is the name given the canyon by its earliest Paiute inhabitants. It’s also the name of the National Monument first established in 1909. (The name was changed to Zion in 1918) the view of Straight-Up-Land from partway up the Wiggles

Wow, yet another week has zipped by! Half way through my stay already but (Oh, boy!) I’ve got some delightful work done already, I’ve identified enough subject matter to keep me busy for half a dozen residencies, and (with the arrival of autumn colors) things are only getting better!

Zion canyon is a parade of towering visual delights and, as you might imagine, the best way to explore is afoot. But, if you want to explore every nook and cranny of the canyon floor (and especially if you need to be able to reach a particular point of interest when the light is “just right”, you really need a means of transportation. The park is so popular, however, that touring the dead-ended Canyon Scenic Drive by private vehicle would be horrendous — resulting in gridlocked congestion, devastating air pollution, frayed nerves, and short tempers. 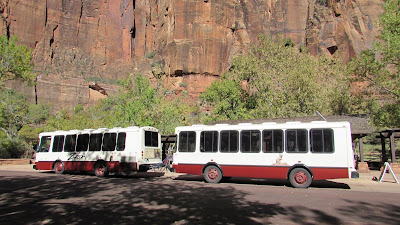 the shuttle -- the easiest, most environmentally friendly way to view the canyon

Fortunately, the Park Service has provided a brilliant alternative — free clean-burning, propane-powered shuttles that run from the Visitor Center at the South Entrance to the top of the canyon and back from 7 a.m. to 7 p.m. (with a new shuttle arriving at each stop every 8-15 minutes.) And Springdale operated its own free shuttles from the park’s south gate to the far end of town. 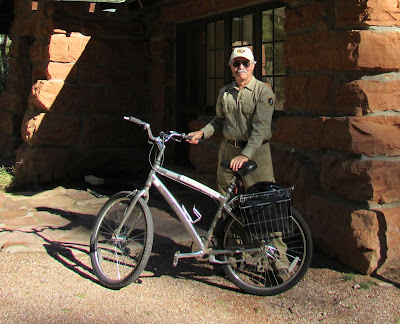 my "studio on wheels"

And, if visitors want to explore the canyon floor between shuttle stops, they can load one of the Zion Green Bikes (or their own bike) onto the shuttle’s bike rack and get off at any of the 8 stops up and down the canyon. (On my first outing I rode the shuttle to the top of the canyon, and then slowly cruise down canyon, stopping as often as a new vista caught my eye.)

Mornings begin around 5:30. (I’ve tried sleeping in once or twice but get so excited about the trails I want to hike, and places I want to explore, that getting back to sleep just isn’t going to happen.) First light comes around 7 and the top of the west canyon wall catches the first rays of the rising sun around 8. The canyon floor remains in shadow until noon and, being high desert, the temperature can easily climb 30-40 degrees between early morning and mid-day (and then drop again as much as the canyon moves into shadow in late afternoon. Dressing in layers(and carrying plenty of water) is the norm for a day on the trails or in the backcountry. 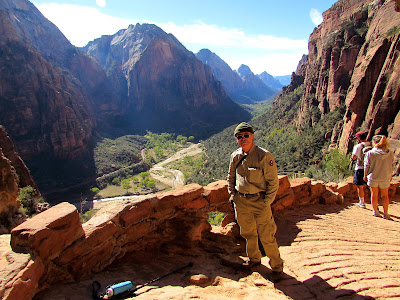 late morning view from the Wiggles (late afternoon is even better!)

The park’s high season officially ended with my first weekend here and, accordingly, the daily shuttle service I’ve raved about was scheduled to shift to weekends-only for the winter this past Monday (Oct. 26), with the Zion Scenic Drive then opened to what has historically been a reduced number of visitors. Unfortunately, the park continues to grow in popularity and there were literally hundreds of cars waiting to turn up the road at Canyon Junction on the first day of the “off season.” I stepped out my front door and was assailed by the pungent smell of car fumes for the first time in a week and a half. And, by 10 a.m. Scenic Drive had reached its 400 car capacity (the maximum number of vehicles that can be allowed up-road and still permit emergency vehicles to respond to calls up-canyon). Park officials had to remain on the canyon floor and try to cope with the flood of would-be visitors and the parking dilemma, but I had the option to escape and headed up Walter’s Wiggles to Angels Landing for some peace and quiet and fresh air. Both the hike and the destination were sublime delights, and everyone on top seemed to be all smiles. (Why not? After all, we were among the angels.) 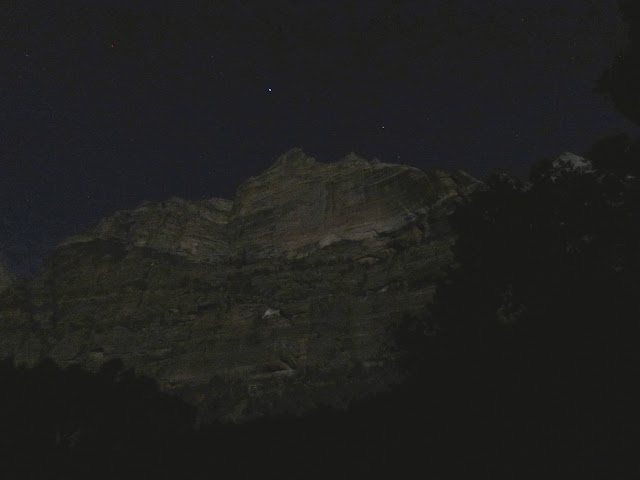 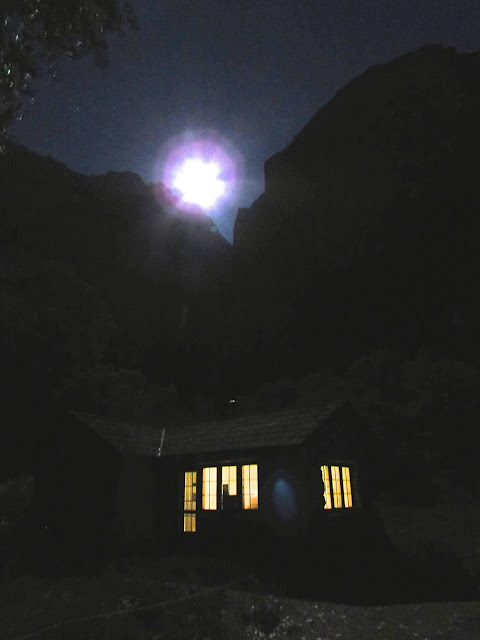 moonrise over my cottage

To compound the traffic problem there was a brilliant full moon Monday night, so visitors could easily walk about the canyon floor after moonrise without the need for artificial lights. (In fact, the moonlight was so bright that everything in the canyon cast shadows and everything from the canyon walls themselves to the cottonwood leaves on the ground were clearly visible.) I blissfully recorded the amazing experience with camera and tripod, but had dozens of park visitors for company. And the Grotto parking lot (which had been empty for the past week and a half) had vehicles coming and going till midnight!

By Tuesday evening it was clear to park officials that the problem of overcrowding was not going to dissipate soon and contingency funds were found to reinstate the shuttles beginning Wednesday morning and continue the service till November 8, when it will return to weekend-only through Thanksgiving. (Hopefully, the visitor counts will be down by then.)

After I’ve identified a particularly interesting subject during “scouting outings” this year I’m using a few new digital tools to help me determine the best time of day to paint or sketch it, and to enable me to navigate back to the exact vantage point when the time is right. 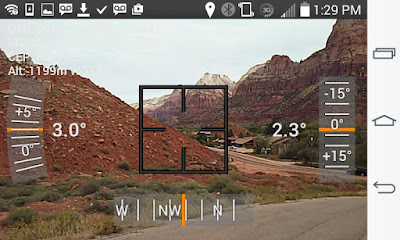 Theodolite -- this is the digital version of a traditional surveyor's tool; great for gathering details about subjects and vantage points. (And helpful in navigating back to them.) 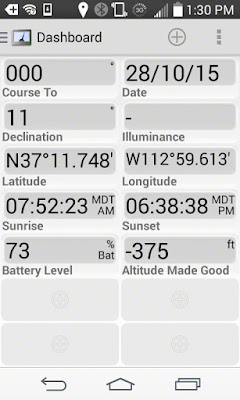 GPS Essentials -- this app is chock full of useful features (but could use more tutorials for novices.) I especially like this customizable dashboard. 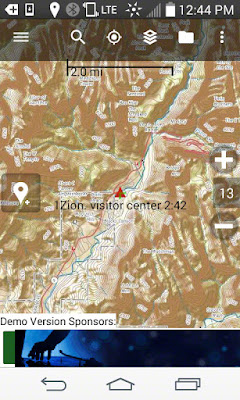 BackCountry Navigator -- is great for visualizing waypoints on a map (and for putting names to the landmarks you're looking at.) You can even specify which map system you wish to utilize. (I've used USGS here.)
Posted by Earnest Ward at 11:13 AM