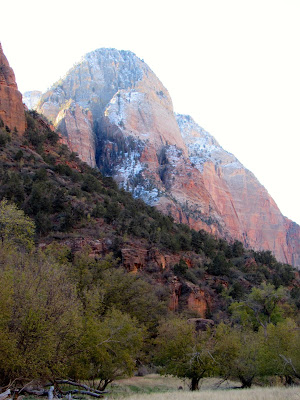 the morning view along the Grotto Trail

Before coming to Zion I was expecting to be thrilled by a deluge of visual wonders that would greet me upon my arrival, but to see a gradual diminishing of new wonders and thrills as the month progressed. The former was most certainly the case beginning the very moment my family and I exited the "visual deprivation" of the east entrance tunnel. However -- as the park has gone from late summer-like weather to autumn and now to early winter-like conditions -- I find that I continue to be thrilled and amazed by the park's ever changing dynamics. There is always something new to see and experience -- in every direction! And I am left thinking that even a year-long stay in this wondrous place would still only scratch the surface of all that it has to offer visitors and residents alike. 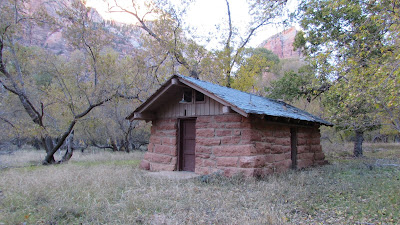 the mysterious Building 129 (no one could tell me its history)

one of my last comp sketches and color studies (look for a post or two about the works
in these series, and the follow-on studio pieces, once I get home)

Week 5, of course, was not a complete week in the park -- just the last two days of my month-long adventure. But, oh!, what lovely days they were! Mornings began with brisk exploratory walks (which continued to result in new discoveries -- be they geological wonders for sketching and painting or architectural finds from the CCC-era) with frequent stops along the way to wonder at the ice patterns on the puddles and snow on the higher peaks. 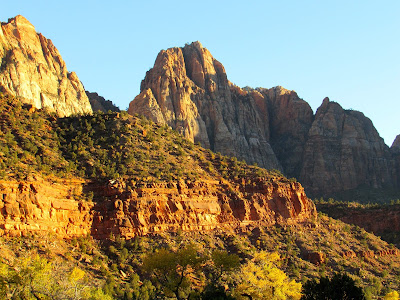 Even on my very last day, as I was waiting for the ride that would take my out of Zion, I was presented with one final, farewell view -- of the Watchman during the "golden hour" just before sunset (a view that was every bit as sublime as the one that greeted me on my very first day.)

Now, those who have followed my little adventure from its beginning will know that the original plan was for my family to come back through Zion midway through my residency and drop off a Jeep (a surprise gift to my son from his uncle.) Well, as plans frequently have a way of doing, that didn't quite work out the way we'd expected. 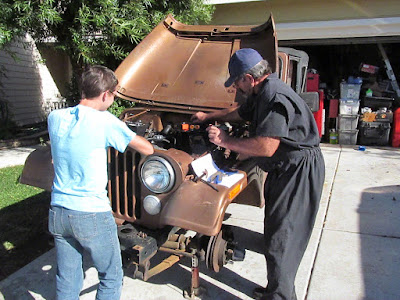 The Jeep in question (a 1980 CJ5 with the 4.2 Liter "Line 6" engine and 4-speed manual tranny) had been in storage in southern California for 17 years and, as it turned out, was a bit more of a "fixer upper" than my brother-in-law had first thought. After extending their stay in SoCal for an extra week (during which my son helped replace the tires, hoses, starter, battery, drain the fuel tank, and rebuild both the carb and distributor) the Jeep was still not quite roadworthy and my family had to return home. (A special thanks to my wife's boss for being so patient and understanding.)

the first two legs of the new adventure

Plan A (driving home solo from Zion) was shelved and I turned to Plan B (get a lift to St. George, catch the shuttle to Las Vegas/a flight to LAX/another shuttle to the in-laws, and enjoy a new 1300-mile adventure driving home solo via the southern route.) 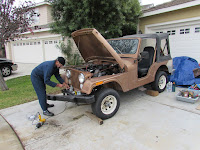 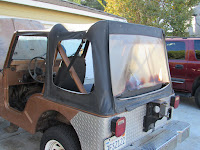 the view that greeted me when I arrived (could have been worse; as a joke, my brother-in-law
told me he'd just blown the transmission), and what 17 years of SoCal heat will
do to a brand new top (windows turned to opaque crispy bacon)

Unfortunately, my first familiarization drive made it clear that my son's "new" Jeep still wasn't ready for a cross-country adventure. (Jurrasic Park 3 made it look so easy!) A second cleaning of the carb was required and we discovered that the original fuel tank was corroded beyond repair. Fortunately, my brother-in-law had a spare tank and sending unit (in great shape) for a CJ5 and, along the way we even scored a near-new replacement soft-top (with split doors!) for a song. 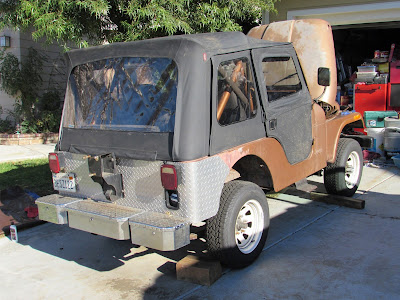 "Pauline" with her brand new tires and top (with clear windows!),
but her hood is still saying, "Feed me!"

So, as Week 5 ends I'm not on the road yet (and am missing my family terribly) but the Jeep is beginning to look quite nice (parked in the driveway) and I'm certainly having an adventure -- even if it's not the one I planned on. (Be sure and tune in next week for another exciting episode of "The Perils of Pauline.") 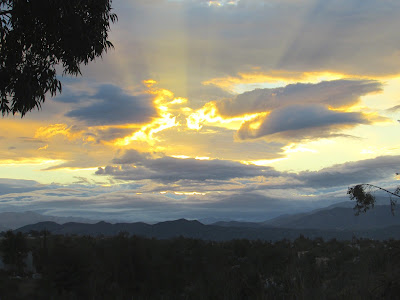 sunrise from my in-laws' terrace (yep, some clouds even have a gold lining)