Endurance (Another Name for the TWSBI Mini?)

Some of you have no doubt noticed that it's been nearly two months since my last blog post, and that I've been AWOL from the Facebook artists' groups lately. A family medical crisis has taken up much of my time with doctor visits, lab tests, and therapy sessions: leaving me with the occasional hour or two for personal studio work (more on that soon) but little else. 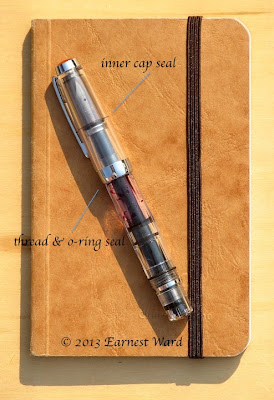 my two "daily carries" for the past four months -- a TWSBI Mini Demo and
very fountain pen-friendly Clairefontaine "Life.unplugged" notebook

One of the items on my regular agenda that went by the wayside for awhile was my weekly ink change-out and "pen hygiene" routine. In fact, I last filled my TWSBI Mini on 18 April. Two months later I noticed that the Mini (which had become my daily carry) was still writing. In fact, it was writing flawlessly every time I uncapped it; and that leads us to the subject of this week's article.

In June, when I began thinking about how (and why) the pen was performing so well despite my thorough disregard, I took a closer look at its design. The first thing I made note of was the o-ring that seals the cap thoroughly in both the capped and posted positions. The second observation (thanks to the fact that my Mini is one of the clear demo models) was that the inner cap seemed to sit completely flush against the "swell" of the feed just above the metal ring of the section. This led me to wonder if the folks at TWSBI had designed the cap/inner cap/section to hermetically seal the pen's ink supply from outside air (and thus prevent ink evaporation and nib dry-out)?

I dashed off an email to Philip Wang with both my questions and speculations -- and he very generously wrote me back with answers. Philip said, "We've achieved this air seal in 3 steps. 1st step... the inner cap within the cap. That seals out the most. Then comes the threaded barrel. Most fountain pens don't thread the cap on. You clip the cap on. Clipping is convenient, however, it lets air through. Threads act like blocks... to keep air out. The last part is the rubber ring." He added, "That's more of a preventative measure.... It's not really necessary for it to be there, but we feel it gives a better feel to the capped pen, and it helps a little with the seal." 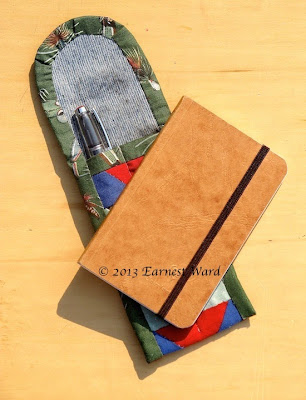 Philip stated, "All our pens, the Mini, 540, 580, Vac700, and the new Micarta version 2 all have the inner sealing cap which we have purposely designed to seal out air. We've tested it, and the 580, Mini, [and] Vac700 last about 3 months or so before it actually starts to dry out." According to Philip, only one model showed signs of evaporation before the 3-month mark. "The Micarta version 2 doesn't last as long. This is due to the material being not as tightly fit as the plastic on the other pens."

Well, at the 3-month mark my pen was doing fine and I was still preoccupied with family matters. So, I let it go. At four months things are finally returning to normal and I can once again share a post with you (and report that the pen is still doing fine -- writing first time, every time I uncap it, without hesitation). I still have a little ink left in the reservoir, and things are still just hectic enough that I'm not prepared yet to return to a routine of weekly ink rotations. So, I think I'll let it go for another month (or until the ink runs out. Expect a final update then (perhaps followed by a similar test involving Platinum Carbon Black pigmented ink). 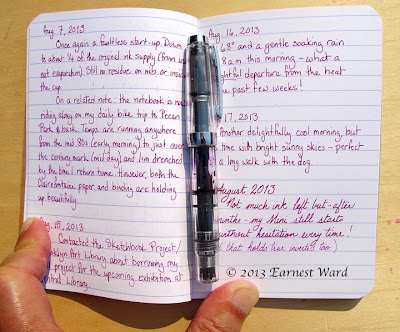 today's update (added just before sitting down to write this post)

In the meantime, if you're still looking for a compact, modestly priced, "daily carry" sketching & journaling pen that will function flawlessly month-in and month-out, it seems pretty safe to say that this little gem from Taiwan will be nearly impossible to beat.

And thanks again to Philip Wang and the folks at TWSBI for giving us yet another reason to love this very forgiving pen.