All Things Great and Small

As one might expect, most of my time in Zion Canyon was focused on the geological giants, the brilliant color effects, and the ever-changing lighting. But, occasionally, I found time to gaze in wonder at the little things -- the flora and fauna -- that call the canyon home.

Two simple (and ever so beautiful) examples: a Western Bluebird that perched on the Grotto bus stop sign while I awaited the shuttle one morning; and a Sacred Datura in full bloom that I discovered near the Junction bus stop one afternoon. (In both cases, not while I was going somewhere, or looking at something else, but while I was waiting -- when I took the time to look at the micro-world about me and was open to new discoveries.) 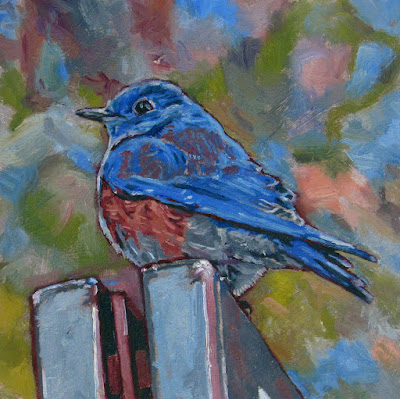 When I am going no place in particular (or when I'm en route to somewhere in particular) I often carry a set of "tools" with which to capture the unexpected, the serendipitous: a pocket full of small Gessobord panels (I call the results "pocket paintings") with my small (ultra light weight) pochade box; and a sheet or two of 3.5"x5.5" watercolor paper (actually heavy ivory-colored, deckled "Verge de France" cards by G. Lalo) tucked away with my field notebooks, pens & watercolors in my daybag. 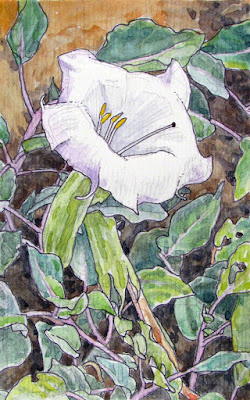 I never know when Circumstance will present me with an opportunity that calls for me to use one or the other; but I usually end up with a delightful keepsake of a memorable mini-adventure when she does.

On a footnote: the Sacred Datura is indigenous to dry areas of the North American west and southwest, and is highly poisonous to humans and livestock alike. However, several of the First Peoples of the region have discovered both medicinal and religious uses for this fragrant bloomer.
Posted by Earnest Ward at 11:11 AM