Bend in the River - The Virgin River, Late Morning (A Step-by-Step Demo) 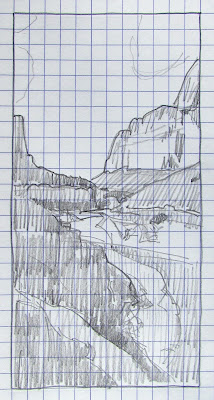 As with each of my paintings from Zion this image began with a decision about format (square? rectangle? elongated rectangle? horizontal? or vertical?) and then a quick compositional study in pencil on gridded paper.

Actually, this particular view had initially suggested an elongated horizontal format (previously posted) because of the width of the canyon at this point. But I was also taken with the verticality of the river and, so, decided to do a second composition. 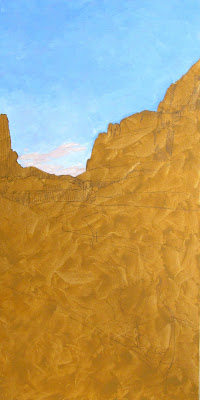 As mentioned in last week's post, I began most of my Zion panels with an undertone of Yellow Ochre (an allusion to the overall warm tones of the canyon's stone wall) and then painted in the sky. The clouds set low in the sky at the far end of the canyon are tinted by the pink Navaho sandstone dust.

Next came the warm tones of the distant west wall of the canyon and the low intensity greens of the desert foliage just below the wall (which introduced a hint of the complimentary contrast to come.)

Working from background to foreground, I next moved to the east wall of the canyon and the foliage just beneath it. Both were, for the most part, still in shadow. But there were splashes of highlight to be seen within the foliage.

The meandering river was added next - pale as the sky itself where it was in direct sunlight, more intense within the shadow of the unseen canyon wall that towered above us to my far left. 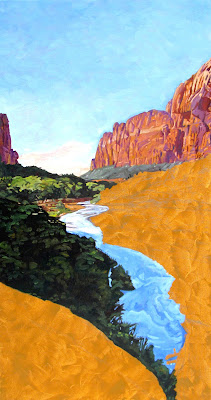 The middle ground foliage tumbling down to the river's edge came next; again in deep shadow except for the faint warm highlights provided by indirect light reflected of the west canyon wall to the right. As I moved into middle ground (and eventually foreground) I began to apply the paint more thickly with a more aggressive, painterly brushstroke that that contrasted with (and complemented) the crisper edges of the dominant shapes. 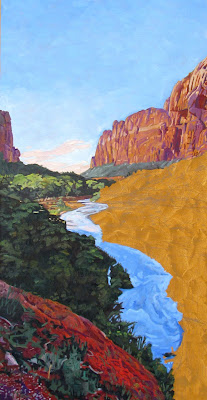 An area of mostly warm red sandstone (with sparse patches of greenery) completed the foreground in the lower left & lower central portions of the painting. 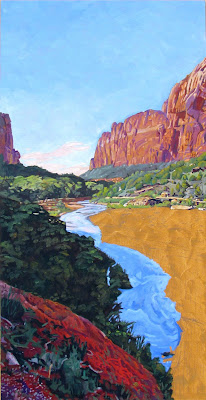 The distant middle ground foliage and trail leading toward Walter's Wiggles & Angels' Landing were blocked in next - being careful to keep contrasts subdued because of the bright direct sunlight and atmospheric haze. 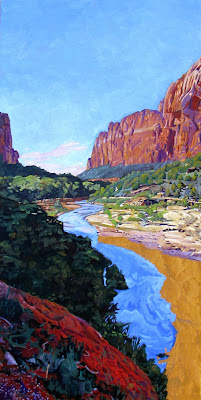 The bright sandy riverbank in direct sunlight was added next. The dry water channels on its surface were hinted at by subtle shadows & tonal variations. 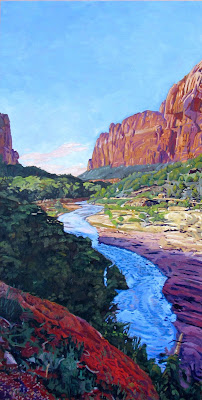 The foreground riverbank was in deep shadows of violet, crimson violet, and blue violet. Core shadows of Phthalo Blue and reflected secondary highlights of crimson pink were also added to the segment of the river in shadow. 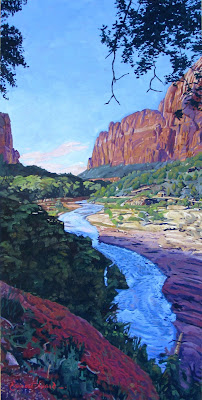 And the final stage of the color study consisted of blocking in the intense darkness of foreground foliage in the overhanging canopy, subduing the intensity of the shadowed Navajo sandstone at the bottom - and adding my signature. The finished work measures 24"x12" and was executed on Ampersand Gessobord with Gamblin Artists' Oil Paints.

I hope you've enjoyed this demo (and maybe found it a bit informative) and that you'll join me again next time.

In the meantime, I hope the weather where you are lets you get out and paint (or sketch.)