Rather than simply post another finished work in my Zion series, I thought I'd share a little insight into my work process with a step-by-step demo this week. 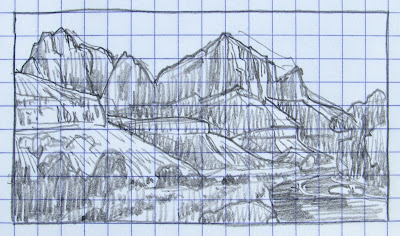 Each of my Zion projects has begun as a quick compositional sketch; which allows me to decide on the composition & cropping of the landscape, and the size & orientation of the panel. (In this case I wanted to do a long horizontal of The Watchman and four buttes just before sunset as viewed from the highway just beneath the Human History Museum.)

I began the panel by first toning it with yellow ochre, underdrawing the major plains & shadows in graphite, and laying in the sky (which was an interesting combination of light cobalt blue and pale pink -- the latter a result of the late afternoon sun reflecting of the fine Navajo sandstone dust that hung low over the canyon.)

With the sky complete I turned my attention to the landscape's background plain -- establishing areas of light & shadow and introducing modest middle-key, cool/warm contrasts. 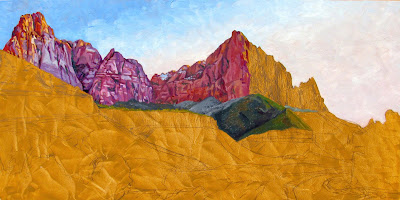 As the background plane of navajo sandstone neared completion I began to block in the most distant areas of foliage....

This introduced the red/green contrast which makes Zion Canyon so visually appealing to artists and visitors alike..

With the distant cliffs blocked in I turned my attention to the four buttes that constitute the middle plain (working from the most distant butte on the right and moving to the foreground on the left -- adding warmth & contrast as I went.) The clump of trees in shadow on the far right mark the beginning of the final (foreground) plane. 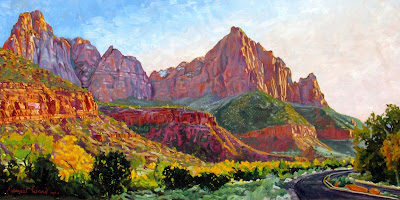 The foreground plane is the area of strongest contrast -- with fall foliage in bright afternoon sunlight and evergreens in deep, late afternoon shadow. 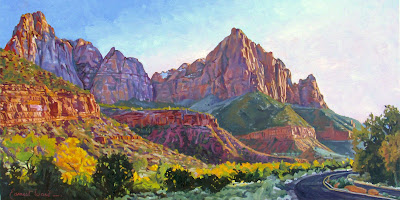 Contrast, hue, temperature & intensity is relative. And it is not until the entire panel has been blocked in that I can determine how accurately I have estimated each. In this case I decided that the background shadows needed to be cooler & the value contrast a bit more subdued.

Well, that's it for this week. Hope you enjoyed the demo... and that you'll drop by again next week.