Le Serenissima. Of all the cities I have ever had the pleasure of visiting, arriving by train in Venice has got to rank among the most aesthetically sublime. Approaching Venice over the causeway is visually enticing -- a sneak preview of things to come. The train station is all massive and marble -- perhaps appealing only to those who are fans of Art Deco. But, to exit the station on a sunny day and to be struck by the complementary blues of the Grand Canal and the clear Adriatic sky on the one hand, and the warm earth tone of the Venetian architecture on the other, is to be transfixed. 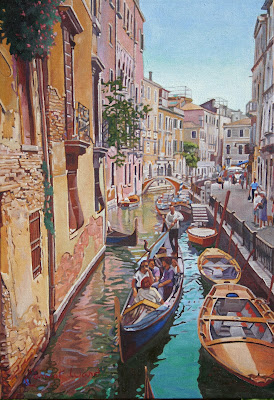 gondolas (coming and going) near my hotel 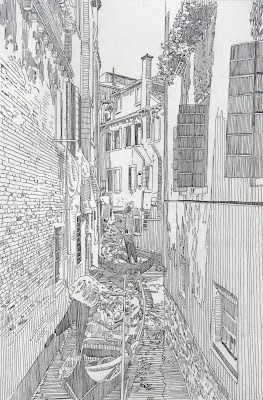 And then there are the acoustics. As beautiful as Rome was, the sound level was like that of any modern city anywhere on the planet. After all, street traffic is noisy. In Florence, on the other hand, many of the streets and neighborhoods have been designated pedestrian only, and the only sounds are of voices and the rather soothing rhythmic plink, plink, plinking of masons hammers. But Venice, oh Venice! In Venice there is no vehicle traffic (nor many lanes wide enough to handle vehicles if there were.) The only sounds are those of people and, as you approach the canals, the lapping of water against hulls and the occasional relaxed thump of a slow-turning boat motor. 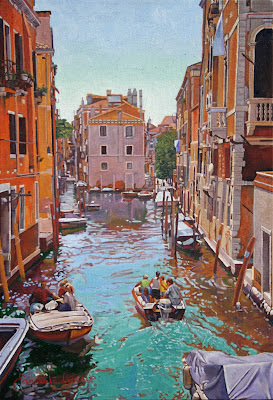 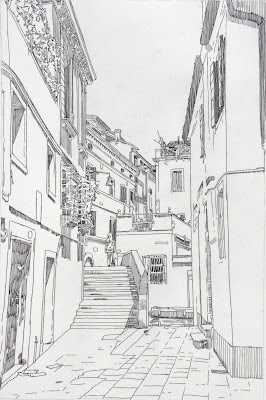 Granted, there are crowded tourist centers -- historic attractions where visitors frequently outnumber residents. But it is easy to slip away down a narrow calle and spend hours sketching and exploring quiet, but beautiful neighborhoods with their earth-toned houses and small, unassuming churches (frequently housing art treasures that put to shame the collections of many world-class museums.) 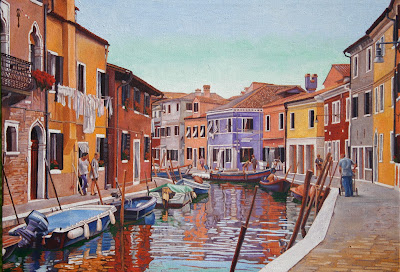 Burano is a delightful riot of pastel colors 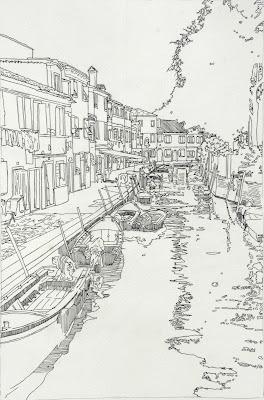 When the heat and the closeness of the alley walls begin to press in on you there are the vaporettos  -- the water busses -- offering a fresh breeze and the open lagoon, making their regular runs to the surrounding islands. Due to the summer heat, I chose to forego a visit to the glass furnaces of Murano and chose, instead, to explore the residential canals of Burano, the Lace Island -- l'isola all'estremità dell'arco della pioggia. 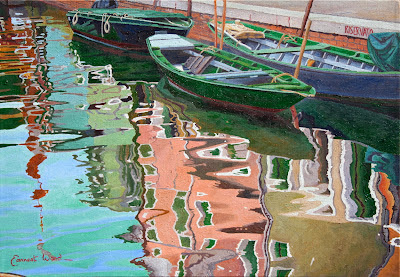 The canals are streaked with every color of the rainbow. 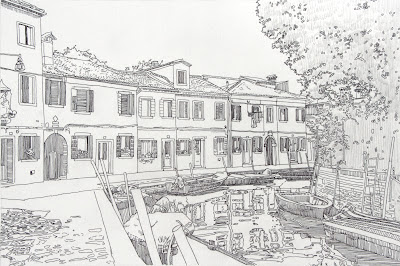 And, in the evening, there were quiet promenades with soothing breezes off the Adriatic, Vivaldi concerts performed by female quartets in period costumes playing period instruments in Vivaldi's own Santa Maria della Visitazione (La Pieta), or simply a late night drink at one of Piazza San Marco's sidewalk cafes (now with most of the tourists tucked safely away in their hotel rooms for the night.) 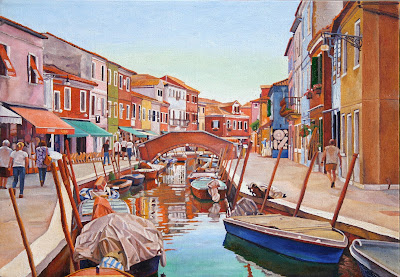 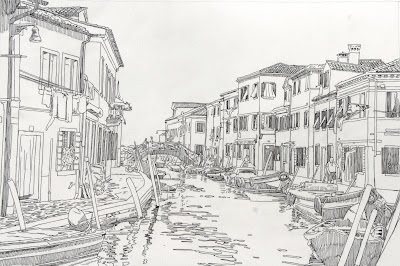 Interestingly, I usually use the same medium and sketchbook structure throughout a given trip. But not so on my last visit to Italy. In Rome I worked primarily in colored pencil and pen & ink. In Florence most of my work was in watercolor. But in Venice and Burano I alternated between line drawings in pen & ink and oil paintings -- the medium of Titian and Giovani Bellini. 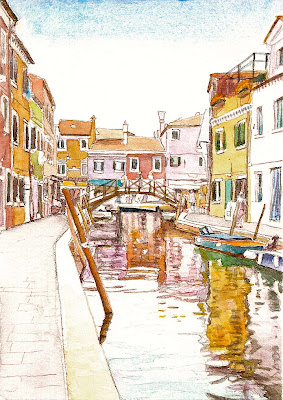 sometimes I sketched on postcards

and sometimes on scraps of watercolor paper tucked into my sketchbook

And, as with so many visitors before me, Venice's siren song continued to haunt my creative thoughts long after I returned home -- even showing up in the form of a glimpse of the Grand Canal (lifted from one of my sketches) in a portrait I did of my daughter in her very first formal gown (for our first father-daughter dance.) 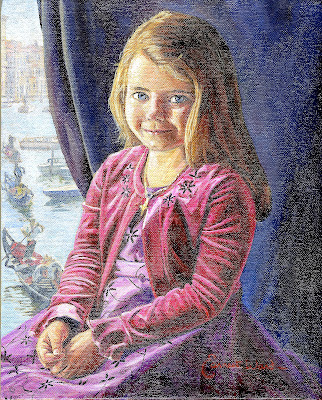 
I hope you have enjoyed our little visit together and that you'll join me again for the next installment of Old Gold -- when we're off to the Lake District.