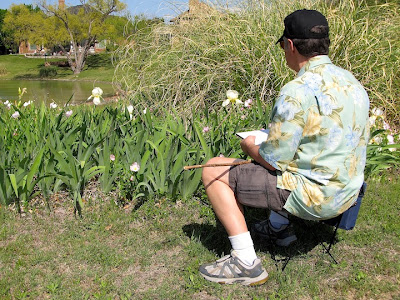 Despite the ongoing drought in Texas we managed to get enough rain in March and early April to bring out some of our colorful spring florals. Combine that with sunrise by 7ish each morning and temperatures in the 60s-80s range most days and you can probably understand why I'm thrilled to answer the siren song of the sketching muse every day now.

On top of all that we celebrated Earth Day this past week and the materials from Exaclair have been pleading for my attention. (I know, it's a tough job but someone's gotta do it. Right?) 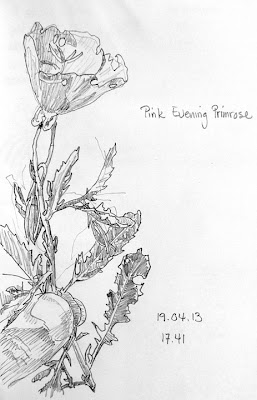 My first outing was with an orange Rhodia Webnotebook, kit bag, and camp stool. My intention was to do some pen & ink work. (This was, after all, satiny-smooth Clairefontaine -- THE fountain pen-friendly paper, yes?) But as soon as I began my preliminary underdrawing I discovered that this paper loves graphite too. It responded to the slightest variations in pressure and easily captured the pencil's full tonal range -- from subtle nuance to bold statement -- without the need for excessive pressure. 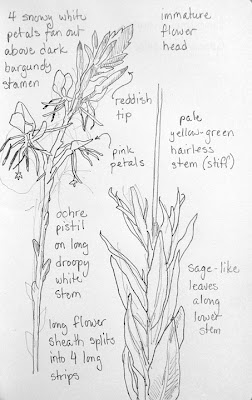 I am a colorist by inclination, and generally prefer to work on a scale that fills both hands. But the intimate 3.5"x5.5" scale of the Webnotebook and the graphite-friendly surface of its paper mean that one need never miss a spontaneous opportunity. Every serendipitous surprise can be captured with ease. 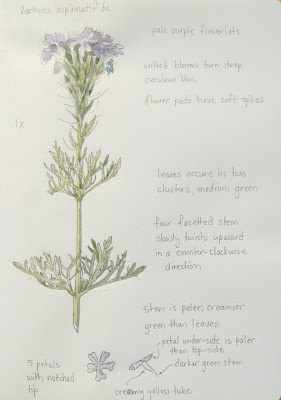 On a personal level, the larger size of the 148mm x 210mm cloth-bound Clairefontaine sketchbook is even more comfortable to work in for longer periods than the pocket-sized journals. And, while the 90g paper weight may be less than optimal for use with watercolor, it does handle modest washes without incurring problematic buckling. 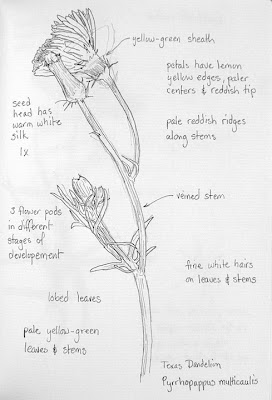 Prior to the arrive of the sampler package from Karen Doherty at Exaclair, USA, in New York, I don't believe I had even read anything about the Exacompta product line. So, I was particularly surprised by the 148mm x 210mm Sketch Book, by the attention to detail (The paper's edges have been sealed with a silvery metallic coating to protect against moisture and airborne contaminants.), and by the classic laid pattern of the paper. 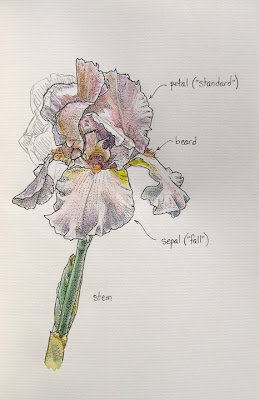 in addition to our native irises, some popular garden varieties have gone feral
ink and watercolor on white Exacompta paper

Note for readers who may be unfamiliar with paper terminology: laid papers show the "chain" pattern of the screen they were manufactured on when held up to a light source, while wove papers (such as Clairefontaine) have a more uniform -- even smooth -- surface caused by the random interlocking or "weaving" of the paper fibers. 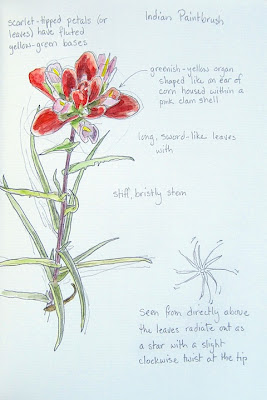 Like the paper found in the Rhodia and Clairfonetaine journals, the Exacompta paper is both graphite- and ink-freindly. However, the Exacompta paper is heavier weight and handles watercolor washes without raising buckling/cockling issues. The surface texture is slightly toothier than that of Clairefontaine paper but without making wear on delicate nibs a cause for concern. 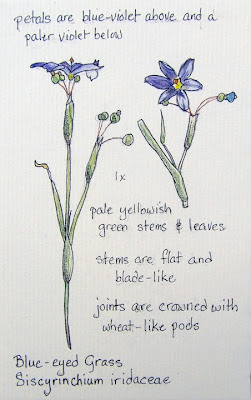 And then there's G. Lalo note cards. G. Lalo is without doubt one of the premiere stationary companies in the world but to suggest that this outstanding paper is "just" for letter and note writing is, I think, unnecessarily restrictive. The weight, surface texture, and sizing make this paper an equally beautiful choice for pen & ink drawings and watercolor painting. (In fact, the Lalo laid surface pattern make it unique among watercolor papers since most are wove rather than laid.) 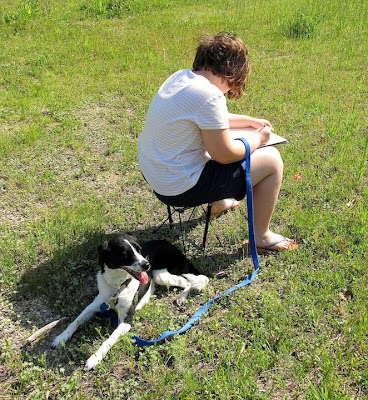 Kate and her sketch buddy

In Part 3 of the Exaclair series I'll delve more into the papers, structures, inks, and tools -- and share a few images too. Hope to see you there.