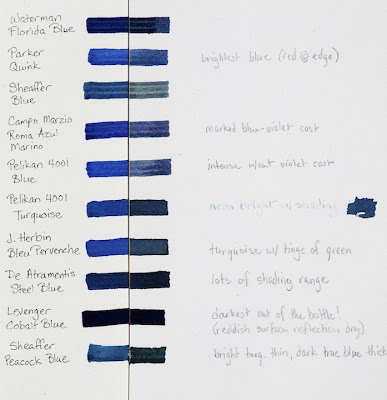 As you may recall, I began the Ink Spots series in early December with a selection of blue fountain pen inks (see "Ink Spots"). At the end of December I expanded the test by adding a selection of reds, oranges and browns to my test window (see "Roses Are Red"). And this week I'm rounding off the test selection with test panels of greens and purples -- two of my favorite springtime colors!

The blues have been in a window with northern exposure (for the most consistent, indirect daytime light) continuously for 17 weeks (since December 3) and -- given that all of the inks tested consist of dyestuffs (which are usually thought of as far less permanent than pigments) -- and must say that I am quite pleased with the results.

Conclusion -- given that I have run similar tests on ball point and roller ball inks only to have some bleach out completely over the same time period, I find all of the inks tested to be quite acceptable for both letter writing and journaling applications, and for the creation of artwork intended for reproduction. Since most journalers do not intend for their work to be exposed to light on an everyday basis, any of these inks should (I think) be expected to last at least as long as the paper their used on. 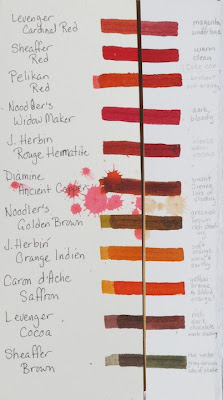 I began the red/orange/brown lightfastness test on December 31 and it has now run for 13 continuous weeks. Others have written about experiencing dramatic fading in the warm colors. So, of the three color groups I tested, this was the one that I expected to see the biggest changes in. Surprisingly, however, with two exceptions (one dramatic, one subtle), all of the inks in this test group retained their intensity, hue and values.

The subtle change was experienced in Sheaffer Brown, which I now suspect is an admixture of a low intensity green and a warmish (and fugitive) red or red-orange. Over the course of the test the latter color seems to have bleached out and the exposed portion of the sample shifted toward a slightly lighter olive drab.

The dramatic change occurred in the ink that was thinnest on the paper -- where I had splashed and then blotted up some Pelikan Red. The immediate effect of blotting the ink was that the remaining stain showed a noticeable shift toward a cooler magenta pink, while the eventual (very evident) effect of blotting was the near complete bleaching out of the splash marks on the exposed paper -- leaving something that looks a great deal like faded mustard stains.

Conclusion -- as with the blues, I think that any of the inks tested in this group would serve the letter writer, journaler, or illustrator well. And, taken as a whole, they offer a fine cool-to-warm range to select from. 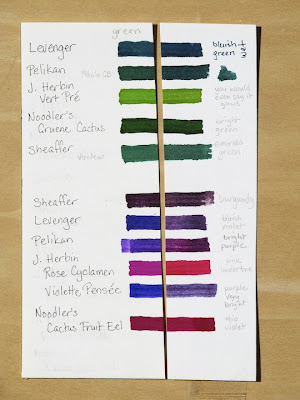 
Testing of the final group was begun on February 18 and has now run for 6 weeks. While this is probably not long enough for a definitive evaluation, I do already have several observations to convey.

First, the greens show no change whatsoever thus far -- in hue, intensity, or in value. Second, all but two of the inks in the purple group (Sheaffer Burgundy and Noodler's Cactus Fruit Eel) have shown marked changes; the Pelikan 4001 Violet has shifted toward red-violet, J. Herbin Rose Cyclamen has become a bright scarlet, and (possibly most troubling) Levenger __ and J. Herbin Violette Pensée both show signs of bleaching out.

Conclusion -- any of the greens (and there are an amazing range from which to choose) would serve well. (And, for the Romantics among us, it might be worth noting that green ink was Pablo Neruda's favorite for both correspondence writing and composing poetry.) Thus far the Sheaffer Burgundy and Noodler's Cactus Fruit Eel ( FYI, "eel" designates a Noodler's ink that has been formulated to "lubricate" the piston in piston-filler pens.) are fade/shift free.

The remaining purple/violet inks will be watched carefully for the next 10 weeks or so and an update will be posted if significant changes are observed.

"Why didn't you place the test swatches in direct sunlight?"

I will never knowingly expose artwork to direct sunlight. Even on those occasions when I've been asked to create outdoor murals I've used the most lightfast materials available AND made certain the work had a northern (indirect lighting) exposure. So, I see no advantage to what I consider an unrealistic test. For wall hangings I will continue to choose pigmented inks. But for journaling, correspondence, and reproduction work I am quite pleased with the amazing range of water-soluable inks we have to choose from.

That said, I will add that there are probably other testers who will disagree with some or all of my choices and methodology. And, of course, testers who are closer to the Equator will likely have swatches that are exposed to even more sunlight (possibly even direct sunlight) than mine. I recommend that you read over their test results too, and then draw your own conclusions. (And feel free to share your own findings and observations as comments. More accurate information will certainly mean better decision-making for all of us.)