Tricks of the Trade -- Posting the Mini 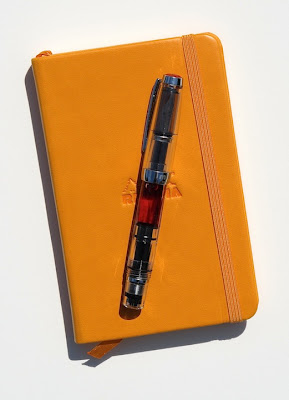 what a delightful pairing!

As many TWSBI fans already know the Diamond Mini is the first pen from the popular Taiwanese manufacturing firm that was specifically designed to be posted. What you may not know, however, is that the Mini's threading system also allows for comfortable posting whether you use the pen in the upright position or the inverted position. Here's how it works. 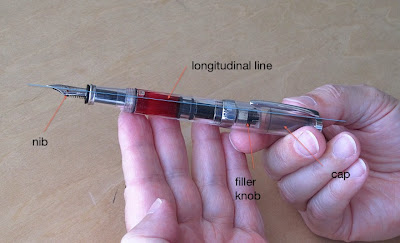 First, while holding the pen, imagine a longitudinal line running from the nib to the filler knob.


When you intend to work with the pen in the upright position, begin the posting process with the clip placed to your LEFT of the imaginary longitudinal line. Thread the cap on till it is snuggly seated against the O-ring. (This will lock the clip up and away from the soft web of your hand.)


If you wish to achieve a finer line by working with the nib inverted, begin with the pen/nib in the upright position and the clip to your RIGHT of the imaginary longitudinal line. As described above, thread the cap on till it is snuggly seated against the O-ring. Now invert the pen and begin writing, drawing, or journaling.

Conclusion: the folks at TWSBI are engineering geniuses for producing such a marvelously versatile writing instrument, and financial wizards for offering it at such an affordable price.

TWSBI's Diamond Mini is a delightful writing and sketching tool and the JoWo nib is smooth as silk -- in both the upright and inverted positions. So, what else could one ask for?

Well, some have said that a variable, more expressive line might be a nice option. And nib meister, Pendleton Brown, has been nice enough to develop his "Pendleton Point Bad Boy with Angel Wings Hot-Tip Butter-line Stub" and several other mod options. 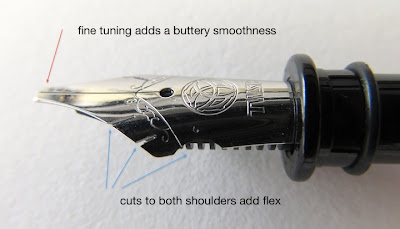 I recently has the opportunity to "test drive" a 1.5mm stub that he had added both smoothness and flex to. The new nib units for the Mini weren't out yet and the 580 hadn't started shipping yet, so Pendleton was kind enough to loan me a 540 unit (which threads onto the Mini's barrel perfectly but is too large to fit under the cap) and the test results were quite enjoyable.

So, if you think you'd like to add even more smoothness and/or semi-flex to your 530, 540, Mini, 580, Vac700, or Micarta, check out Pendleton's site, drop him a line, or pop by his table at just about any upcoming pen show. You'll find that he's full of all sorts of fascinating information (that he freely shares with others) and a pleasure to visit with. 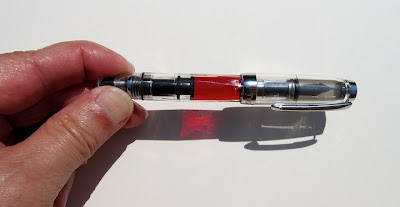 Recently Larry Marshall and I have been discussing Saffron ink (from Caran d'Ache) on Cathy Johnson's AJW FB page. During the discussion Larry suggested that Saffron is a red ink and that it might be problematic as a drawing ink for architectural studies and urban sketchers. Well, as can be seen in the photos (and videos) above, Larry was right -- sort of.

It turns out that Saffron ink is very much like its floral namesake; in concentrated form it has a decidedly red appearance (and a beautiful translucent red appearance, I would add, when loaded aboard a TWSBI clear Mini). But, in its original state as a flower petal or when applied as a written or drawn line on paper, it takes on an equally beautiful but more distinctly orange hue.

As for its usefulness as a color for architectural renderings? Well, I recall that my alma matter (California College of Arts & Crafts) used a rendering of the school's Queen Anne-style administration building and towering redwood tree (in red ink) on their stationary for years. So I did a little test of my own to see how the Saffron would do. The results might not be for everyone. (Then, what is?) But for some it could certainly offer a warm and interesting alternative to the standard black. 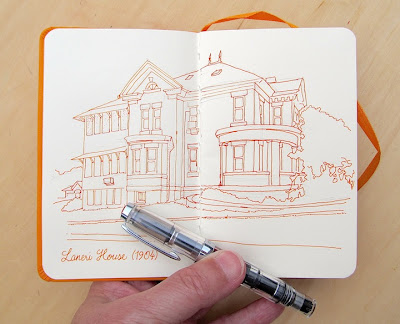 
What alternate colors work for you?
Posted by Earnest Ward at 8:19 AM